One caught, one on the run from Tuesday robbery

AHOSKIE – A Virginia man is under arrest while his partner in crime is on the run following an early morning robbery near here Tuesday.

Hertford County Sheriff Dexter Hayes said that 21-year-old Taimon Dequan Ellis of Waverly, VA is being held in the Hertford County Detention Center under a $20,000 secured bond. Ellis is being charged with one count of common law robbery, felony possession of stolen goods, possession of marijuana, and two counts of resisting a public officer. 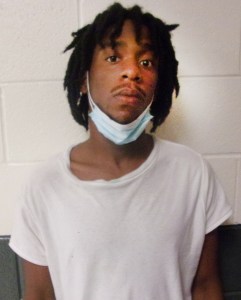 Hayes said a second suspect in the robbery is also believed to be from Virginia. The Sheriff added that the identity of that suspect is unknown at this time.

The two men are suspected of stealing $1,200 from a local resident along with the victim’s shoes and backpack. All but the cash was later recovered.

Hayes said his deputies received a call at 1 a.m. on Tuesday regarding a man who said he was robbed at the intersection of U.S. 13 South and Saluda Hall Road, located near Ahoskie. The victim said the suspects were in a green Toyota Camry.

HCSO Sgt. Brandon Williams was traveling on NC 11 South, heading to the call, when he met the vehicle matching the description of the suspect car. Hayes said Williams turned around on the vehicle near the Meherrin Indian Tribal Grounds and at that point the vehicle stopped and both suspects fled on foot into the nearby woods.

Deputies searched for several hours in the cover of darkness for the suspects.

“Later that same morning, we received a called that one of the suspects was spotted in the 800 block of NC-11, walking along the wood line,” Hayes said.

“The search continued for the second suspect, but he remains at large,” Hayes stated. “We had one deputy injured during the search, he was seen at Vidant Roanoke-Chowan Hospital and was released hours later.”

Hayes thanked the responding agencies for their assistance.