Ganging up on gangs 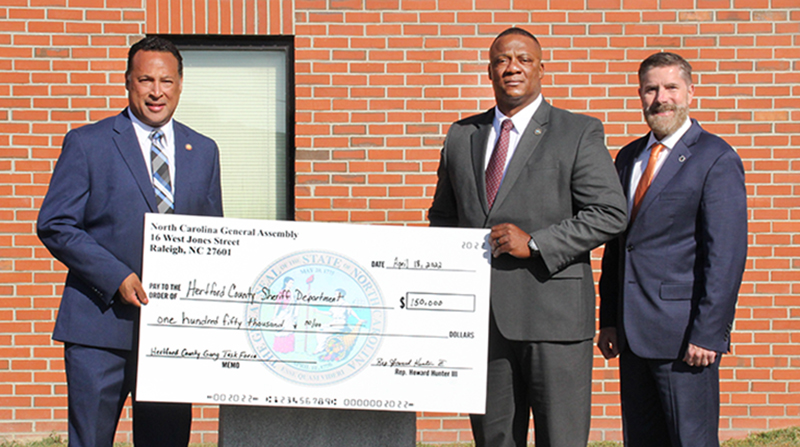 WINTON – As a former county commissioner, Howard Hunter III understands that the majority of rural counties are forced to use the majority of their revenue to pay for mandated services.

Hunter, an Ahoskie native who represents District 5 in the NC House of Representatives, was able to successfully negotiate local funds in the current year state budget to assist Hertford County. A portion of those funds ($150,000) will be used by the Hertford County Sheriff’s Office to launch a Gang Task Force.

“As a small county, we often seek out partnerships to make things happen, and that’s what happened with these funds to start up our Gang Task Force,” said Hertford County Sheriff Dexter Hayes. “We are so thankful to Representative Hunter and the North Carolina General Assembly for providing these funds.”

Hayes said the funding will be used in two ways: enforcement and being proactive by visiting local schools to engage in an anti-gang campaign as well as conducting community forums for parents and the general public.

“At the schools, we will visit with the students and inform them of the adverse impact it has on their lives, their future, when they decide to join a gang,” Hayes explained. “As for our parents, we want to make them aware of what signs to look for from their children that they may be involved in gangs. Catching this early is the key. Gangs are connected to peer pressure and peer pressure is connected to bullying.”

The Sheriff added that gang membership can also lead to criminal activity and, in the worse case scenario, lead to committing acts of violence.

“Gang activity and acts of violence are on the rise in our county,” Hayes stressed. “We need to do something now to curb that and to protect our citizens.”

While Hertford County is part of a multi-jurisdictional Narcotics Task Force, he would like to see something similar in nature to address the rise of gang activity locally.

“This money can help with adding personnel,” Hayes noted. “We need that enforcement to work hand-in-hand with the proactive side of this where we go into our schools or conduct the public forums in an effort to curb gang activity.”

“This isn’t just a local or state problem, there’s a problem nationally with gangs,” said Rep. Hunter. “As a business owner in Ahoskie, I hear a lot of gunshots. I admire what Sheriff Hayes is doing. He reached out to me, asking was there anything I could do at the state level to fund a Gang Task Force. I have a good relationship with [NC House] Speaker Tim Moore. He knows there’s a problem with gangs here and everywhere. We were able to put something in the state budget to help our local counties combat the rise of gang activity.”

Hunter went on to reference gangs as “domestic terrorists.”

“Something needs to be done,” Hunter noted. “I hope when these gang members are arrested, the court system follows through with the appropriate punishment and not just let them out on probation to do it all over again.

“I’m happy to give the Hertford County Sheriff’s Office $150,000 on behalf of the state and the state hopes you use this money well and to continue to do a great job,” Hunter added as he presented Hayes with a ceremonial check.

“We couldn’t do this on our own,” Cotton said. “The gang issue is huge. I was surprised when I first came here just how active the gangs are. It’s an issue that our Sheriff wants to get ahead of and these funds will give him a good jumpstart.”

Cotton added he felt the county’s board of commissioners would want to expand the efforts of the Task Force in the future.

“We’re always seeking other streams of revenue when it comes to protecting those who live and work in Hertford County,” Hayes said. “Our commissioners and our county manager have been very supportive of my department and we will always strive to think outside the box to make it better.”

In addition to negotiating state funding for the Gang Task Force, Rep. Hunter also worked to include in the state budget $250,000 for the Hertford County Museum, $150,000 each to the Ahoskie Main Street and the Murfreesboro Main Street Start Up initiatives, and $100,000 for improvements to the Winton Wastewater Treatment Plant.