WINTON – John W. Eley, Sr. (88) the son of the late Daisy and Lula Scott Eley departed his earthly life to be with the Lord on Tuesday, April 26, 2022 at Vidant Hospital in Greenville, NC. 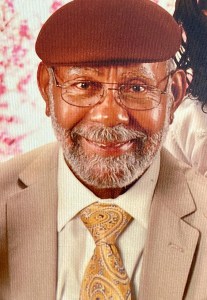 He was a native of Hertford County where he received his formal education in the public schools and graduated from C.S. Brown High School. He was a life-long farmer in Winton, NC until his retirement. Mr. Eley was a dedicated member of New Bethany Missionary Baptist Church where he served as Minister of Music for over 60 years. Mr. Eley’s ministry of music was not limited to New Bethany, he also played the piano and organ for many other choirs and churches in Hertford County, Northampton County, Gates County and Bertie County. Because of his devotion to his music and widespread musical acclaim, he was often affectionately referred to as the “Maestro”. Mr. Eley was also well known for his staunch dedication to his family and his love of exchanging jokes with everyone. Mr. Eley’s friendship, hearty laughter and ever-present toothpick will be missed by those who knew him well.