Ms. Christiansen was born in Gates County on May 16, 1923, and was the daughter of the late Paul Eley Mathias and Elizabeth Dale Gardner. In addition to her parents, she was preceded in death by her sisters, Anne Sexton, Aldeen Duke, Joyce Sexton; and a brother, Thomas Mathias. 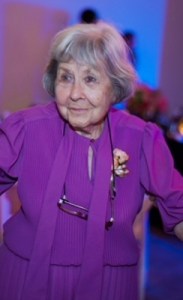 Ms. Christiansen had worked as an office manager with Northrup Corp., a defense contractor, where she was known as “Willi” and retired in 1983, to return home and care for her mother. During her career she gained perhaps one of the highest security clearances known for a woman of her time. She would often travel for her job – working for the Department of the Navy in California, then with Northrup in New Mexico, Florida and Washington, DC. Juanita was involved in the research of the “Flying Wing”, now known as the Stealth Bomber, as well as the design of the parachute used to land the Gemini Space Capsule. She had been quite the “Socialite”, attending a number of prestigious functions in Washington, DC, was a model for “Look Magazine” and just lived life to its fullest!

While able, Juanita remained an active member of Winton Baptist Church. She had served as teacher to the Ladies Sunday School Class, was on the Hospitality Committee and often visited shut-in church ladies – reading the Bible to them. She was also member of the Ahoskie Woman’s Club.

To many family members, she was lovingly called “Nene” and is survived by several nieces, nephews, other extended family members and special close friends that include Mary Jane Lacey, Debbie Holcombe and Annette Bedgood.

In keeping with her wishes, there will be no memorial service but rather the family has decided to have a Celebration of Life on Sunday, May 15, 2022. A time of food and fellowship/visitation will begin at 1 p.m. in the fellowship hall of Winton Baptist Church, followed by the ceremony at 3 p.m. in the Sanctuary, led by Pastor Derik Davis. Then as she directed, a more private gathering will be held to place her ashes in the Chowan River, where she was baptized.

The family would like to express their sincere appreciation to Pine Forest Rest Home for the love and dignity that Juanita received while in their care. The staff succeeds in making the residents feel like family and the facility like home. We also wish to acknowledge Community Home Care and Hospice of Roanoke Rapids for their compassion during her last months. Their team provides a collective level of supportive care that is superior! To our pastor and his wife, Derik and Allison Davis, there are no words to express our appreciation for the continued Christian love you brought to Juanita’s life. Your visits, even before she left home and then through her stay at Pine Forest were a bright spot to her days. In addition, to our church/family/friends, thank you for the outpouring of love and support to her both while still at home and then in Pine Forest. The visits, calls, cards and special occasions just meant the most to Juanita, as well as the family. Finally to Miss Barbara at the Grapevine Restaurant in Woodland, thank you for all the “to go” food you helped to provide for Juanita’s lunch on our Sunday visits!

In her memory, the family would like to suggest contributions be made to Pine Forest Rest Home, 3277 NC 35, Woodland, NC  27897. This small non-profit facility deserves the community’s continued support. Or due to Juanita’s love of animals, memorial donations could also be made to any animal organization of your choice.