Horne walks off Crusaders in split on Senior Day

MURFREESBORO – Mya Horne slapped a game-winning RBI single in the bottom of the eighth inning here Saturday as Chowan gained a softball split against North Greenville on Senior Day.

Haleigh Reid and Serena Riley paced the offense with three hits each with a double. Courtney Lamb, Hannah Eden, and Horne added two hits each. Horne collected four RBIs and the game-winning hit.

Megan Vincent picked up the win in the circle tossing 8.0 innings and posting six strikeouts.

North Greenville loaded the bases in the top of the first before Vincent recorded a strikeout and a ground out to end the threat.

Chowan broke the scoreless contest in the bottom of the second as Reid opened the inning with a walk before Lamb and Gentry recorded a single to load the bases. Horne hit a sacrifice fly to center to score Reid for the opening run of the contest.

NGU rallied in the top of the fifth to plate three runs off five hits to take a 3-1 lead. The Crusaders added a run in the sixth inning to extend their lead to 4-1.

The Hawks would rally in the bottom of the sixth inning as Reid singled to right with one out to start the rally. Reid moved over to second on a sacrifice bunt by Lamb. Gentry reached on an error before Riley doubled to plate the pair to close the gap to 4-3. Horne singled up the middle to plate Riley to even the score, 4-all.

The Crusaders regained the lead, 5-4, in the top of the seventh on a sacrifice fly.

Eden sparked a rally in the bottom of the seventh with a single to left. A pair of ground outs looked to squander the Hawks’ rally before Lamb singled to left center to plate the pinch-runner, Elizabeth Heller, to knot the score at 5-all.

Vincent was able to get a pop up to start the extra innings before Eden threw out the placed runner at second trying to steal third. Vincent produced a ground out to end the inning.

Riley singled to left to put runners on the corners in the bottom of the eighth before Horne singled to right center to bring home the winning run, 6-5.

North Greenville salvaged the split by winning game two of the doubleheader, 9-1. 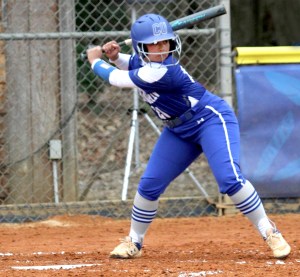 Mya Horne had two hits on Saturday, including a game-winning single in game one of a doubleheader vs. North Greenville. Photo courtesy of Chowan University