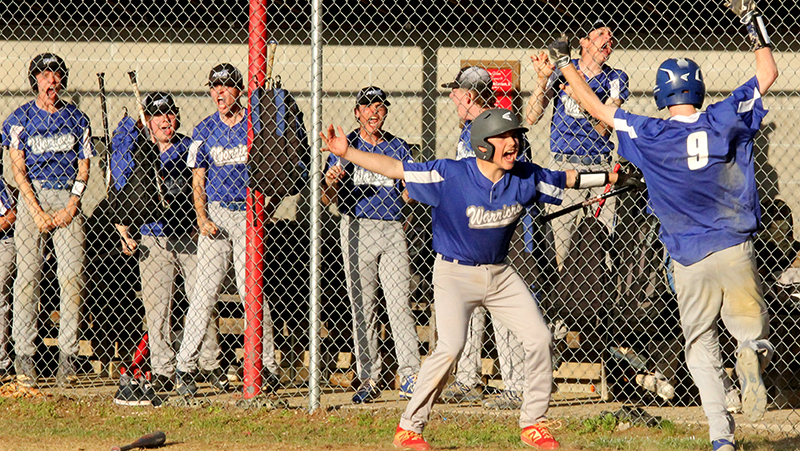 The Ahoskie Christian School dugout erupts in celebration after their teammate, Cody Hurdle (right), scored the winning run in the bottom of the ninth inning in Wednesday’s championship game of the 11th annual Sgt. Will McLawhorn Memorial Baseball Scholarship Tournament. ACS edged Ridgecroft School, 2-1, in the title game held at the Northeast Academy baseball field. Staff Photo by Cal Bryant

LASKER – They scored first; they scored last, and those two runs were enough to win it all.

Ahoskie Christian won its first-ever McLawhorn title in just its second year of being invited to play in this annual Easter week event. The Warriors lost to Ridgecroft in last year’s title game. 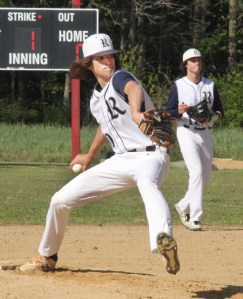 Ridgecroft starting pitcher Will Revelle pitched six strong innings for the Rams in the McLawhorn championship game. He allowed just one run off two hits and mowed down 12 batters via the strikeout route. Staff Photo by Cal Bryant

The yearly tournament, held at Northeast Academy, pays tribute to the late U.S. Army Sgt. Will McLawhorn of Conway. McLawhorn, a Northeast Academy graduate, was killed in action in 2010 while stationed in Afghanistan. He played baseball and basketball at Northeast, graduating in 2005.

“We were just thrilled to have the opportunity to play in this tournament that honors a local man who gave his life for our country,” said winning coach Chuck Munford following the game. “I’m proud of my guys for the way they hung in there today against a very good Ridgecroft team. A win like this gives us a lot of momentum as we now get ready for our state tournament.”

Tied at 1-1 at the end of regulation play, both teams had their chances as the game moved into extra innings.

In the top of the eighth, Ridgecroft’s Preston Edwards, who led the Rams with a 3-for-4 day at the plate, drilled a two-out double to the gap in left-centerfield. Grafton Williams followed with a liner to center that looked as though it may fall in for a hit, but ACS centerfielder Kellan Whitby raced in to make a “snowcone” catch to end the threat.

“That one [catch] took my breath away…there was a lot of white [ball] showing at the top of Kellan’s glove; he saved the game for us,” Munford noted.

Jesse Wynn led off the bottom of the eighth for ACS with a single to rightfield, but Ridgecroft pitcher Bill Vaughan, in relief of starter Will Revelle, struckout the next three batters.

With one-out in the bottom of the ninth, Whitby reached on an error, but was erased at second on a steal attempt. Hurdle followed by reaching on an error. It appeared his attempt to steal second would end by the same fate as Whitby as Revelle’s throw (now as the catcher) was on the mark, but the ball was dropped, giving ACS new life. Early then drove a pitch for a single to leftfield and the ensuing throw to plate to nab Hurdle was too high as the Ahoskie Christian dugout erupted in celebration. 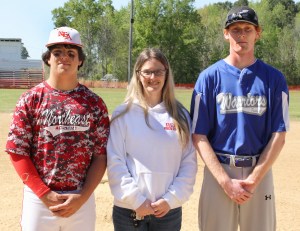 Carter Hatcher (left) of Northeast Academy and Cody Hurdle of Ahoskie Christian School were this year’s recipients of the Sgt. Will McLawhorn Scholarship. Melanie McLawhorn (center) presented the scholarships in memory of her late brother who was killed in action in 2010 while with the U.S. Army and stationed in Afghanistan. Staff Photo by Cal Bryant

“I wasn’t hesitating about waving Cody home on that play,” coach Munford remarked. “In games like this one, where both teams are playing at a high level, you take your chances when the opportunity arises.”

Scoring opportunities were at a minimum in the title game that was dominated by outstanding pitching. Hurdle worked nine complete innings for the Warriors, allowing just one run off eight hits. He fanned 11 batters and did not issue a walk. Revelle got the start on the mound for the Rams, working six strong innings where he gave up one run off two hits, whiffed 12 ACS batters, and walked just one. Vaughan worked the final three innings for Ridgecroft, surrendering one unearned run off two hits and fanned three batters.

Ahoskie Christian scratched for one run in the bottom of the first inning. There, with two outs, Hurdle walked, stole second and third, and scored when Early blooped an RBI single into centerfield.

Ridgecroft came close to tying the game in the top of the second. Edwards led-off by reaching on an infield single and stole second. On a hit-and-run play, Williams grounded out to shortstop and Edwards raced around third in an attempt to score. However, ACS first baseman Hunter Pearce’s throw to the plate was perfect and Early, the catcher, applied the tag to erase the scoring chance.

With two outs in the top of the fourth, Williams and Colby Hauser laced back-to-back singles, but were left stranded.

One inning later, Ridgecroft’s Blayden Miller ripped a double to the gap in right-centerfield, but was doubled-off the bag on a fly-out to center.

Ridgecroft’s heavy hitters (#3, #4, #5 in the batting order) were due up in the top of the sixth and they delivered. With one-out, Vaughan blooped a double down the rightfield line and advanced to third on a passed ball. Edwards followed with a game-tying RBI single to center. Edwards moved to second on a fielder’s choice, but Hurdle avoided further trouble to ending the half-inning with a strikeout.

Ahoskie Christian, now 7-2 overall, put the go-ahead run in scoring position with two outs in the bottom of the sixth where Whitby reached after getting hit by a pitch. He stole second, but was cut down at third on a steal attempt.

In addition to the great day at the plate by Edwards, the Rams also got hits from Miller, Revelle, Vaughan, Williams and Hauser.

Also on Wednesday, tournament officials presented $1,000 scholarships to two seniors. Earning those were Hurdle along with Carter Hatcher of Northeast Academy.

Willie McLawhorn Sr., the tournament director, thanked the event sponsors, the volunteers, and the players, coaches, parents, and fans. 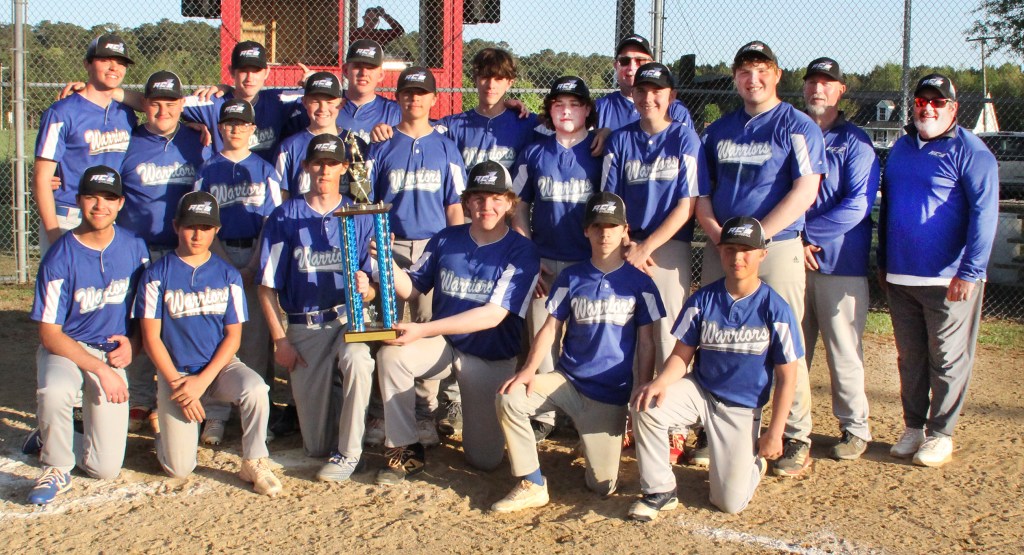 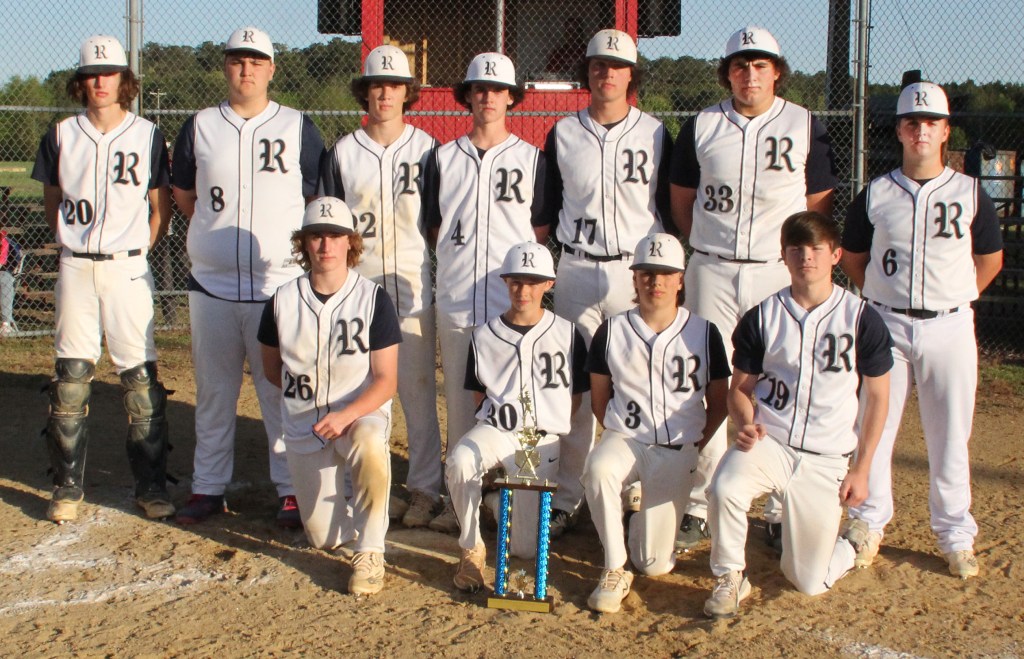 Ridgecroft School has been a dominant force at the McLawhorn Tournament over the past two years, finishing second this year on the heels of winning last year’s annual event. Staff Photo by Cal Bryant