AHOSKIE – Kerry McDuffie’s work in Ahoskie has come to an end.

The Town Manager, less than two months shy of celebrating his fifth anniversary in Ahoskie, was fired this afternoon (Friday) in a special called meeting of the Town Council. 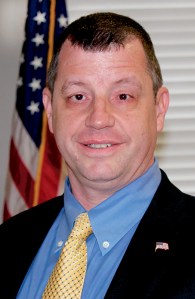 Kerry McDuffie was fired Friday afternoon as Ahoskie Town Manager. He had been with the town since June 19, 2017. File Photo

Following a 49-minute closed session to discuss personnel, the vote, taken in the ensuing open session, to terminate McDuffie’s contract was unanimous among the four Council members present. Councilman Charles Freeman was unable to attend due to an illness.

Councilman Matt Bradley made the motion to terminate the contract. Councilman Charles Reynolds offered a second.

The termination, which was without cause, was effective immediately.

Mayor Weyling White advised McDuffie that his contract with the town will be honored as to its wording regarding severance pay. A copy of his contract was not immediately made available upon request by the Roanoke-Chowan News-Herald.

However, Cecilia Jones, who serves as the interim attorney for the Town of Ahoskie, said she would have to meet with the town’s finance officer to work out the details of that severance package.

Jones informed the Council members they needed to recess today’s meeting in order to reconvene at a later date at which time they would be presented a budget amendment that would contain the details of the severance owed to McDuffie.

After Mayor White asked McDuffie to return to Town Hall and clean out his desk and gather his personal belongings, he exited, for the final time, the Council’s meeting room at the Ahoskie Fire Department.

“Ya’ll have a good day,” McDuffie remarked as he headed towards the door.

White said the Town Council will move forward in an effort to hire an interim Town Manager. He stated the town will ask the North Carolina League of Municipalities to assist them in that search.

McDuffie began his job in Ahoskie on June 19, 2017, succeeding former Manager Tony Hammond who had retired one month earlier after a 12-year career locally.

Prior to coming to Ahoskie, McDuffie served as the Chief Administrator for the town of Southport in Brunswick County. There his proficiency was in finance, to include budget planning and implementation, cash and investment management, as well as contingency planning as relates to the town finances.

Once in Ahoskie, McDuffie inherited a town facing financial hardship. At that time, the latest audit of Ahoskie’s finances revealed in January, 2017 showed the town’s unassigned General Fund was at minus $26,008. This was a complete turnaround after the 2014-15 audit showed the General Fund was in the black to the tune of $1,008,379.

In March of 2017, the Town Council passed three proposed budget amendments that would decrease both the town’s revenues and expenditures by roughly $850,000, helping to bolster the budget shortfall.

The town had debt totaling more than $21 million in 2017. That fact landed the town on the North Carolina Local Government Commission’s Unit Assistance List (UAL) for at-risk local governments.

By September of 2021, the town’s debt had been reduced from 21 accounts totaling $21.2 million to 12 accounts totaling $17.8 million. That allowed the town to be removed from the UAL, drawing praise from State Treasurer Dale R. Folwell, who chairs the LGC. It also led the Environmental Finance Center at UNC-Chapel Hill to produce a short video about McDuffie’s 26-point cost-cutting measures.

A native of Cedar Creek, near Fayetteville, McDuffie earned a bachelor’s degree in psychology and criminal justice from UNC-Charlotte and a master’s degree in public administration from Appalachian State University in Boone.

McDuffie interned in Cary and then was an assistant to the town manager of Troy, in Montgomery County. He served as village administrator of Tobaccoville, in Forsyth County, for three years before spending two years in St. Pauls, in Robeson County. In 2004 he became Town Administrator in Fremont, in Wayne County; his last post before landing in Southport in 2013.