The tournament honors the late Sgt. Will McLawhorn, a Northeast Academy graduate who was killed in action in 2010 while serving in the U.S. Army stationed in Afghanistan. McLawhorn played baseball and basketball at Northeast, graduating in 2005. 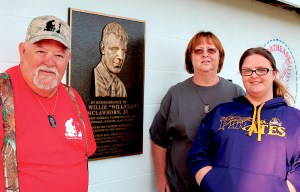 Members of the McLawhorn family (from left) Rev. Willie McLawhorn, Sr., wife, Diane, and daughter Melanie, pose beside a bronze plaque dedicated to their late son and brother, Sgt. Will ‘Claw’ McLawhorn, who was killed in action while serving in Afghanistan in 2010. File Photo

Admission is $6 per person.

Tuesday (April 19) at 4 p.m., Monday’s losers will face off in the consolation game with Monday’s winners playing in the nightcap (around 6 p.m.) for the tournament championship.

Concessions (hamburgers, cheeseburgers, hot dogs, snacks, and soft drinks) will be sold. Tournament t-shirts will also be available for sale with the proceeds benefitting the scholarship fund.

“For all these years, we’ve experienced so much caring and love through this tournament,” stated Rev. Willie McLawhorn Sr., Will’s father who also serves as the tournament’s director. “Speaking for my family, we really appreciate all that’s been done and continues to be done to honor and remember Will.”

Will McLawhorn, a native of Columbus County, moved with his family to Conway in 1998. There, his love of basketball and baseball continued, playing both sports on the junior varsity and varsity level. He was selected to the All-Roanoke-Chowan Baseball Team his senior year.

In 2006, McLawhorn enlisted in the U.S. Army. Upon graduation from basic training, he was assigned to the 101st Airborne Division where he became a part of the Screaming Eagle family.

Prior to deployment to Iraq in 2007, he graduated from Air Assault School, earning his Air Assault Wings. He served 15 months in Iraq and reenlisted for five years while there. During the next months he earned his Airborne Jump Wings as well as additional training for becoming an NCO. In June of 2010 he deployed with his unit to Afghanistan. He grew to love his country and wanted to protect her…even if it meant giving his life. He loved his band of brothers who affectionately called him “Claw.”

Two of his Army comrades recall the impact that McLawhorn had on their lives.

“There was no one I’d rather follow into a fight,” said Brandon Davis. “I was always a bit intimidated by Claw, but as soon as I got back from Kaf he walked right up to me and gave me a hug. It was pretty awesome. Thank God that such men have lived.”

“Claw was a leader; he wasn’t a boss,” stated Erik Jorgenson. “Often when I think back and remember Claw, I remember how encouraging, positive, and intelligent he was. They were all things I really admired about him, and honestly I learned the most about being a better person from him.”

According to his platoon leader, then Lt. Cory Kastl, Will would often take the point while going on patrol because he was good at it. He would often trade places and take the point for soldiers who were married so that they didn’t have to take that chance. Will also refused to take his mid-deployment leave until all the others in his unit had opportunity to take theirs. He was killed before he got that leave.

For his actions on his last mission prior to his death, McLawhorn was awarded the Army Achievement Medal. The certificate of award states: “Cpl. McLawhorn performed with distinction during Operation Lion Strike. Throughout the ten day operation, Cpl. McLawhorn displayed tremendous leadership and poise under multiple small arms fire engagements with enemy forces. Cpl. McLawhorn was an integral part of the success of his Platoon, and his actions were extraordinary in a dangerous and demanding combat environment.”