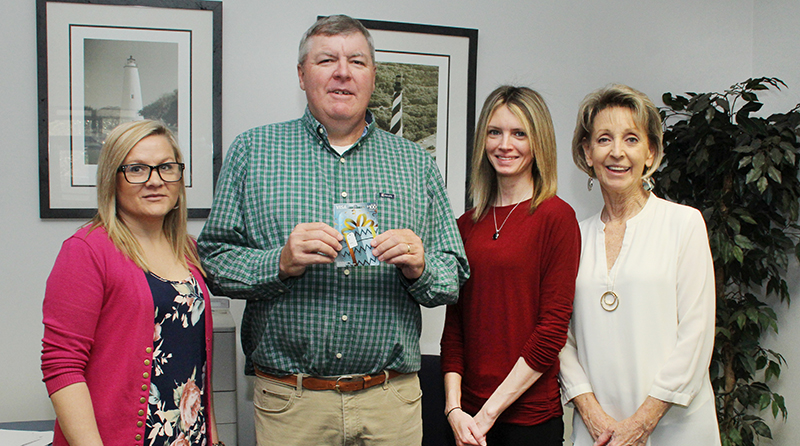 Sid Jenkins holds a $100 gift card that was the prize in the Crossroads – 2022 Treasure Hunt as conducted by Roanoke-Chowan Publications. He is joined by members of the RCP advertising staff, from left, Dawn Mizelle, Anna Phipps, and Judy Farmer. Staff Photo by Cal Bryant

AHOSKIE – Of all the clues that led to the Crossroads – 2022 treasure, leave it to a “highwayman” to figure it out.

Sid Jenkins of Ahoskie is the winner of a $100 gift card after his entry was randomly drawn from among three correct answers to the Crossroads – 2022 Treasure Hunt.

The other correct entries were submitted by Karen Cavin of Murfreesboro and Dennis Deloatch of Conway. They, along with Jenkins, correctly identified the radio tower located behind WDLZ-FM, located outside of Murfreesboro, as the mystery location.

The names from the three correct entries were placed into a container from where veteran Roanoke-Chowan Publications Senior Sports Writer Billy Harrell reached in and pulled out Jenkins’s name.

There were four clues scattered within the 60 pages that comprised this year’s Crossroads edition, which published in late February and was inserted into the Roanoke-Chowan News-Herald and Gates County Index. Those clues, listed in order of appearance, were:

It stands along an east-west highway that was once extremely busy with traffic.

It stands in one county but casts its shadow in another county.

It looks down on the sun’s reflection.

It is involved in music but doesn’t sing or play an instrument.

Jenkins said he found clue number one as the most revealing.

“I’ve worked with NC DOT for a long time, so I remember when we closed off that portion of Highway 158 there by the Murfreesboro radio station when the Murfreesboro Bypass was built,” Jenkins said.

That knowledge helped him pocket a $100 gift card.

As for the other clues, the Murfreesboro radio tower is located on the Hertford County-Northampton County line. A solar farm is situated behind the radio station’s property, and, of course, that tower helps broadcast the station’s daily dose of music.

There were a total of 29 entries into the Crossroads Treasure Hunt. Three of those entries – Edith F. Seiling of Gates, Linda Hofler of Sunbury, and Peggy Lefler – had the right idea, but the wrong tower. Each submitted entries that identified the radio tower on the property of WRCS-AM near Ahoskie as the mystery location.