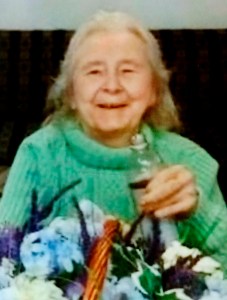 Mrs. Smith was born on January 7, 1939 and was the daughter of the late George W. and Irene Hobbs Jordan Bunch. In addition to her parents, she was preceded in death by her husband, Burnis Aubrey “Buck” Smith; by an infant sister; and by two brothers, Sammy and Junny Jordan.

A retired seamstress from Don Juan Manufacturing Corp. in Hertford, later she worked as a telemarketer with a coupon company, and at Houtz & Barwick in Elizabeth City. She was a member of the Belvidere-Ryland Church of Christ.

Surviving is her daughter, Brenda Smith (Mark “Seagull” Ashley) of Sunbury; her granddaughter, Brandi Blanchard; and her great-grandson, Hunter Blanchard.

In accordance with her wishes, services will be private.