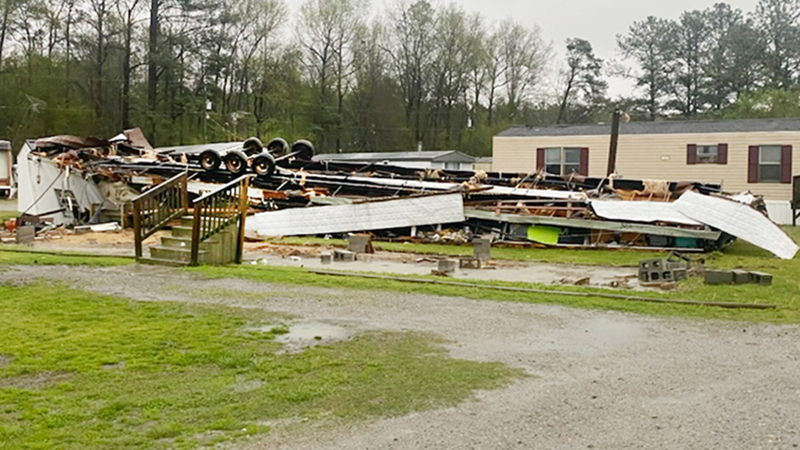 A mobile home on Bertie Park Lane near Hexlena was flipped over due to straight-line winds on Thursday. Photo by Herbie Tayloe

In Bertie County, straight-line winds as high as 75 mph caused a mobile home to overturn on Bertie Park Lane, located near Hexlena. One person was reportedly injured.

A large tree blocked NC 42 in Powellsville. There, members of the Powellsville Volunteer Fire Department worked with NC DOT and Dominion Energy to get the road back open around 10 pm. 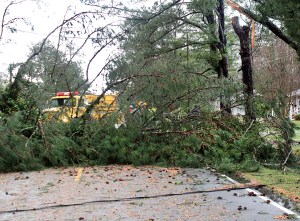 NC 42 in Powellsville was closed until 10 pm on Thursday after a storm blew down this tree. Photo by Gene Motley

There were reports of trees and power lines down in several areas of Bertie County, to include the Cremo Road area and in the vicinity of Jack Branch Road near Lewiston Woodville.

Additionally there were reports of hail along NC 42 in the area of Rockpile Road back towards the Trap and Colerain.

Gates County Sheriff Ray Campbell said there was storm damage from either straight-line winds or possibly a tornado in the Gatesville area.

“If it was a tornado, it didn’t touch down,” Campbell said. “There were some really wicked looking clouds around 6:30 p.m.”

Campbell said a greenhouse on the campus of Gatesville Elementary School was totally destroyed. A residence in that same general area suffered roof damage, the Sheriff noted.

“There was also a box truck, owned by the school, that was flung around in the wind,” Campbell said. “The wind pushed that truck into another truck.

“The good thing is that nobody was injured,” Campbell stressed.

He added that there were reports of hail in different areas of Gates County.

Medium size hail fell reportedly fell along NC 305 in the Drakes Crossroad area of Northampton County. Howling winds and heavy downpours were reported along US 158 from Jackson to Murfreesboro.

There were no reports of storm damage in either Hertford or Northampton counties.