Students uninjured after school bus erupts in smoke and flame

CORAPEAKE – Quick action by a veteran school bus driver is credited to saving the lives of 30 schoolchildren near here this morning (Wednesday) after the vehicle filled with smoke and caught fire. No one was injured.

Cindy Jefferson was behind the wheel of Bus #90, owned by Gates County Public Schools, and had just pulled off from a stop on Union Branch Road near Corapeake when she heard a loud noise. 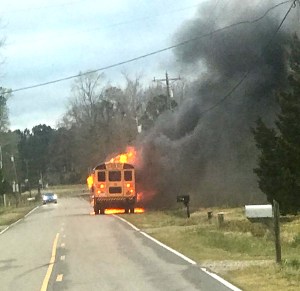 These two photos show the severity of this morning’s (Wednesday) fire that destroyed a bus owned by Gates County Public Schools. Contributed Photos

“I initially thought that the bus had blew a tire or maybe the engine had blown up,” she said early this afternoon in a telephone interview with the R-C News-Herald. “Smoke started pouring inside.”

She steered the bus to the shoulder of the road and then sprang into action to empty the vehicle of its most precious cargo – 30 youngsters (grades 6-to-12).

“We always have a drill at the opening of each school year as to how to orderly disembark the bus in case there is an emergency,” Jefferson said. “The students knew exactly what to do and how to do it. They exited single file and in orderly fashion.”

Jefferson added that no flames were present at the time the children were disembarking.

“It was only smoke at that time; it was probably five minutes after we got off the bus that we saw the fire,” she noted. “We got as far as we could away from the bus. We walked about a half-mile up a path.”

“Just as the last student got off the bus, two Xylem Tree Service trucks stopped,” she said. “There were about six-to-eight men who helped the students get safely across a ditch and down the path. I didn’t get their names, but they were wonderful. They were in the right place at the right time.”

Jefferson, a school bus driver for 33 years, said she has never experienced an incident like what occurred this morning.

“My mind was racing 500 miles a minute,” she said. “All I could focus on was the safety of the children. We’re all safe and sound.” 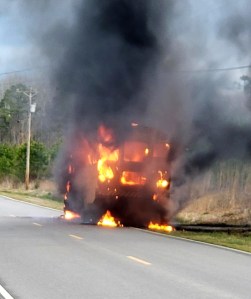 “I commend Mrs. Jefferson for her bravery, courage, and knowledge of safety first for the students,” said Gates County Schools Superintendent Dr. Barry Williams. “The bus was quickly and safely evacuated by a heroic act of quick thinking from Mrs. Jefferson.”

Williams added that the parents of the students on the bus were notified of the incident, as were local law enforcement, fire, and EMS. Another bus was sent to pick up the stranded students.

He said the cause of the fire is under investigation.