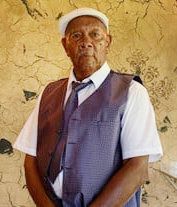 He was a native of Hertford County where he received his formal education in the public schools. He was employed by Golden Peanut in Aulander, NC until his retirement. After retirement from Golden Peanut, he took on a job with Roanoke-Chowan News-Herald delivering newspapers until his health failed him.

He was preceded in death by one sister, Ms. Goldie Burden; and one niece, Stacie Burden.

Memorial services will be held at 1 p.m. on April 23, 2022 at Reynolds Funeral Home, Ahoskie, who is handling the arrangements.