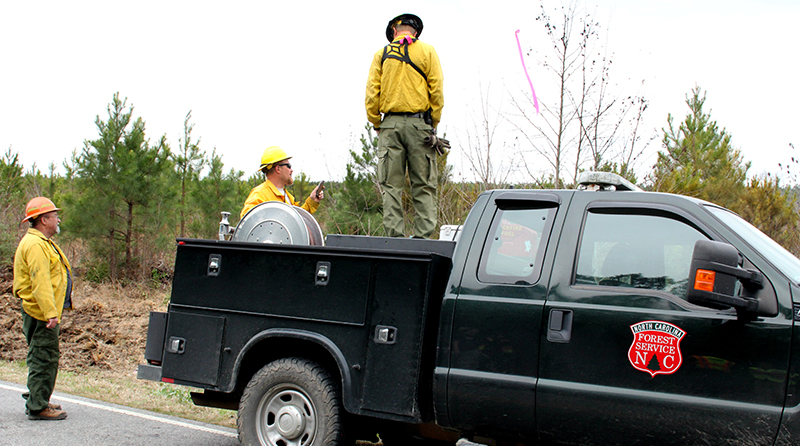 NC Forest Service personnel discuss their options regarding the deployment of manpower and equipment at the scene of Wednesday’s wildfire along a portion of Early Station Road at the Bertie-Herford County line. Staff Photo by Cal Bryant

AHOSKIE – A busy week of wildfires across the Roanoke-Chowan area included a blaze on Wednesday that scorched 60 acres along Early Station Road at the Bertie-Hertford County line.

Mike Petruncio, District 7 Forester with the NC Forest Service, said the fire was accidently started when a vehicle experienced mechanical troubles on the road’s shoulder.

“With the extremely dry weather we’ve been having, it didn’t take much to ignite the dry grass at the road’s edge and it quickly spread into an area of young pines,” Petruncio said. “That, coupled with low humidity and winds fanning the flames, resulted in the fire walking across that area in rapid fashion.”

The wildfire spread into a larger area of 15-year-old pine trees. Petruncio said plows from the NC Forest Service offices in Bertie County, Hertford County, Martin County, and Chowan County were used to encircle the fire.

“We had a couple of our scout planes flying overhead to direct those plows,” Petruncio said, adding that single engine air tankers were also used to drop several loads of retardant onto the blaze.

Weyerhaeuser, which Petruncio said owned timberland in that area, aided in extinguishing the fire by deploying a scout plane and a contracted helicopter that was able to make several drops of retardant.

He said 70 percent of the wildfire was in Hertford County with the remaining 30 percent in Bertie County.

“The majority, about 90 percent, of the timberland that was impacted is owned by Roseburg Timber Company,” Petruncio noted. “The other 10 percent is privately owned.”

“We thank the assistance of the local emergency responders there in the Bertie, Hertford County area. We have a great working relationship with those partners,” Petruncio stated. “We also need to thank our partners at Tri-County Airport where our planes were able to reload.”

James Caddy, Assistant District 7 Forester, served as the Incident Commander on the scene.

“We had personnel on the scene until around 6 p.m. to monitor the area inside the fire lines,” Petruncio said.

Early Station Road was closed to thru traffic until that time.