Celebration pays respect to the vision of C.S. Brown 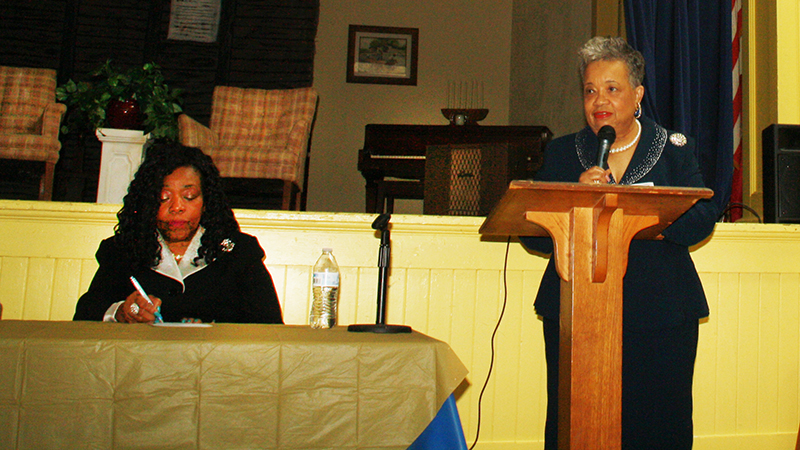 WINTON – Did you know that C. S. Brown School was founded by a man who was also an editor and missionary?

This was one of the interesting facts learned at the 136th Observance of Founder’s Day for Calvin Scott Brown School. This annual event took place Sunday, March 27 at the C.S. Brown Regional Cultural Arts Center and Museum (the Center) in Winton.

Livestreamed simultaneously on the Center’s Facebook page (facebook.com/CSBrown Cultural Arts Center), the Founder’s Day program was attended in person by a small number of people practicing social distancing and wearing facemasks, in keeping with guidelines of the Centers for Disease Control and Prevention (CDC).

The program was held in the auditorium, affectionately known as Brown Hall.

The speaker for Founder’s Day was Rev. Berna Lawrence Stephens, President of the Board of Directors for the Center, using the theme “Preserving the Heritage of our Forefathers.” Rev. Stephens is a 1965 graduate of C.S. Brown High School and the associate pastor of Jordan Grove Missionary Baptist Church in Winton.

“This building was built in 1926, before many of us were born,” Rev. Stephens said.

The invitational letter for Founder’s Day stated, “This facility is the last building erected at the school under the administration of Dr. C.S. Brown.”

“One of my greatest accomplishments was graduating from C.S. Brown,” Rev. Stephens shared. “When I moved back to North Carolina, I promised God that I would serve Him. I’m glad to be here to preserve the legacy of our forefathers.

“We cannot forget the efforts of Dr. Calvin Scott Brown and others to keep the building going,” Rev. Stephens continued. “Ask yourself, ‘What can I do to preserve the legacy of our forefathers?’ Many of you here have supported Brown Hall.”

She discussed ways people can preserve the heritage of their forefathers. These include knowing one’s forefathers, promoting the Center’s importance, getting to know one’s legacy, and asking oneself what else can be done to preserve the legacy.

“Know your forefathers,” Rev. Stephens stressed. “Dr. Brown was an editor, missionary, and the son of Black and Irish parents born in Salisbury, North Carolina. He came to Winton to preach at Pleasant Plains Baptist Church. He founded Chowan Academy (which later became C.S. Brown School) the same year.”

The school held different types of programs, including talent shows.

“Dr. Brown and his wife, Amaza Drummond Brown, taught without pay,” Rev. Stephens noted. “After Dr. Brown died, H. C. Freeland was the second principal, from 1936 until 1970. The high school closed in 1970 when integration began.”

According to the nomination form from the National Register of Historic Places for C.S. Brown School Auditorium, Freeland was a native of Florida who was educated at Durham’s North Carolina State College (now North Carolina Central University) and New York University.

Rev. Stephens noted that Freeland knew the students and “nothing got by him.”

“Get to know your legacy,” she remarked. “Be proud of it and promote it. C.S. Brown is the oldest African-American high school in North Carolina.

“What else can you do to preserve this great legacy,” Rev. Stephens asked the audience. “We need your support. To my knowledge, this is the last African-American historical structure in Hertford County. When this is gone, our heritage is gone. If you don’t have money (to donate), give service.”

Members of the Board of Directors also participated in the program.

Alice Sharpe, Vice President of the Board, welcomed everyone, and Rev. William Michael Reid offered prayer. Reid was the first president of the Center’s Board of Directors.

Futrell said, “They fill this building, because they were here.”

Futrell mentioned the dramatic plays that the students performed and how they instilled within her an appreciation for this art form.

Jill Reid, a descendant of Dr. Calvin Scott Brown, made a donation.

This office also has a desk which Amaza Brown’s father, William Drummond, carved.

“Drummond was a master carpenter in Lexington, Virginia,” Reid stated.

Information which the Center’s Executive Director, Dr. Mary R. Harrell, provided for the article “Joys of Yesteryear” in the February 2022 edition of Crossroads magazine sheds more light on Brown Hall: “This building is a Rosenwald Foundation funded-building and is on the National Register of Historic Places. After being restored in 1986… it has been used for weddings, plays, festivals, concerts, family reunions, class reunions, banquets and Founder’s Day activities….”