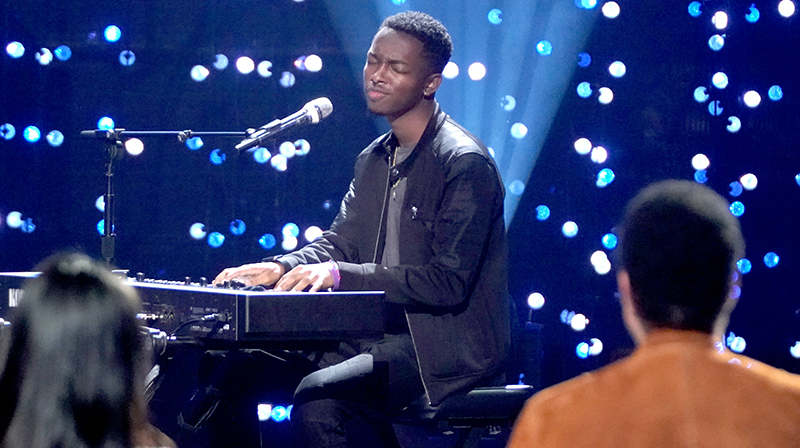 Tobias Hill of Como closes his eyes and bears down as he performs “Back at One” during Monday night’s broadcast of American Idol on ABC. Hill impressed the judges and has advanced to the next round of the singing competition. Photo by ABC / Eric McCandless

HOLLYWOOD, CA – Tobias Hill made it through the “genre challenge” of American Idol on the episode which aired on March 28.

Hill, a music teacher from Como, received a golden ticket to Hollywood from the judges during his audition episode earlier this month. This week’s episode featured the hopeful contestants singing their favorite genre of music. Judges Luke Bryan, Katy Perry, and Lionel Richie then selected which people would move on to the next challenge.

Only a small portion of Hill’s performance was shown on Monday night’s episode, which airs nationally on ABC. Like he had during his previous performance, Hill played piano while he sang. His song of choice, representing the R&B genre, was Brian McKnight’s “Back at One.”

Before taking the stage, Hill got to sit down to talk with Studdard who won the second season of the singing competition.

“I definitely have to bring my ‘A’ game every single time if I want to make it all the way to the end,” Hill said afterwards.

After the R&B performances, the judges selected Hill and fellow contestant Katyrah Love to continue on to next week’s challenge.

“I am very grateful,” Hill said. “I know some of my riffs weren’t there. I could have done so much better.”

Hill will get a chance to show off his skills again during the “duet challenge” which will air at 8 p.m. on Sunday, April 3 on ABC.

Hill is the son of Tyris and Brenda Hill. In a previous interview with the News Herald, he credited his late grandfather, James Albert Long, Sr., as the one who taught him the foundations of music.

He’s a 2014 graduate of Hertford County Early College, and went on to earn a degree in music from North Carolina A&T University. In addition to his job as a music teacher at Southampton County Middle and High School, he also serves as a church music director and an office assistant.

Other singers from North Carolina who currently remain in the competition include Kaylin Roberson from Raleigh and Ryleigh Madison from Whiteville.