Thanks for your service! 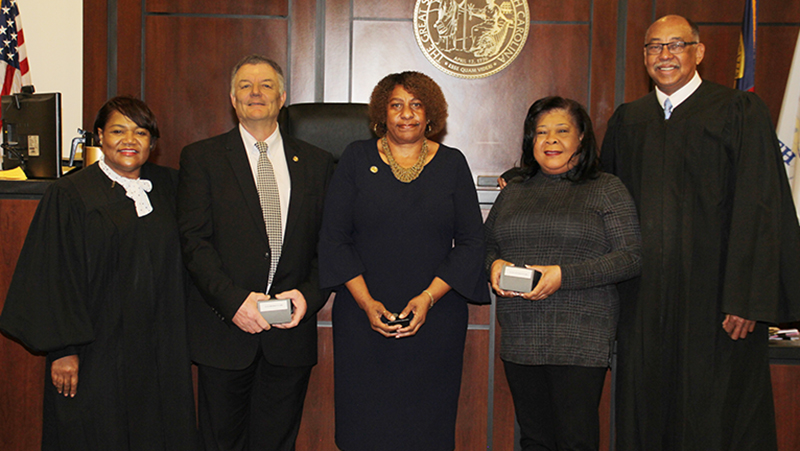 WINTON – They are on the front lines of the judicial system…often the first individual a person may see soon after being placed under arrest.

Magistrates are officers of the district court system, in charge of conducting preliminary hearings for those charged with criminal offenses. They can issue arrest warrants and search warrants and even accept pleas in lower level misdemeanor crimes. They have the power to set bail (in non-capital cases) and are called upon to preside over Small Claims Court. They are the only civil officials in the state who can perform a marriage.

Local Resident Superior Court Judge Cy Grant said it was his pleasure to pay tribute to “three very important people who are being recognized by the State of North Carolina for their outstanding service.”

“I have made thousands of decisions as a judge over the past 34 years, but the decisions I made to hire these three individuals as a magistrate are among the best ones I have ever made. You each do a wonderful job,” Judge Grant remarked.

“People don’t understand when a person encounters the judicial system, the first person they see, often times, is a magistrate,” he continued. “[Our magistrates] see people at their worst. They see them when they’re mad, or drunk…there’s no telling what you each encounter. You had to deal with them early in the morning and late at night. While we are in the bed asleep you were out doing your job. You make our jobs easier. I thank you so much for the service you have rendered over the past 20-to-25 years.”

“These are my Chiefs….my Chief Magistrates,” Judge Branch said. “They are chosen based on dedication, knowledge, and their ability to work with and collaborate with other people. And because they are so good, I rarely hear of any issues, any problems, or any concerns. Their experience, their personalities, their dedication comes in to benefit all of us. It also benefits me because I don’t get phone calls from those complaining how they were treated.”

Judge Branch continued by saying, “I’ve been asked over the years how am I able to balance my schedule and cover these four counties. The answer is I have magnificent Chief Magistrates. I’ll call them to ask what needs to be done because I know they’ll give me honest answers. Judge Grant did a great job in hiring them all those years ago. I’m so proud to have the opportunity to work with these outstanding judicial professionals.”

Williams said she started out in law enforcement, first as a dispatcher and then as a deputy sheriff.

“I’ve always respected those in law enforcement,” she said. “When a position came open for a magistrate, I applied and I’ve been involved in that role for 25 years. It’s something I really enjoy doing.”

Moore also traces her roots to law enforcement, not actually as an officer, but as the daughter of the now late Joe White, the beloved Chief of the Rich Square Police Department.

“I was approached by Venus Spruill, who was then the Northampton County Clerk of Court, about becoming a Magistrate,” Moore said. “I thought about it for about 30 minutes and applied for the position. The rest is history.”

Brinkley said he was always interested in the position of a Magistrate.

“I knew Merle Vaughan (former Hertford County Magistrate) very well and the work he did intrigued me. And by hanging around police, fire, and rescue folks all my life I was able to get use to being part of that,” Brinkley stated. 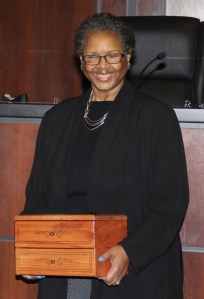 Also recognized on Thursday morning was Sheila Eley, Trial Court Coordinator for Hertford, Bertie, Northampton, and Halifax counties. Eley was honored for her 30 years of service.

“When we merged our districts, there was a lot of conversation about the best way to do it,” Judge Branch recalled. “Halifax didn’t know a lot about Bertie, Hertford and Northampton, and vice-versa. But what we had in our corner was Shelia Eley. Just like the Chief Magistrates we just finished honoring, Shelia is identical in her role as our court manager. She’s also part of the reason I’m able to work in four places at one time.

“Shelia does everything, she’s always on duty,” Judge Branch said. “I can call her morning, noon, and night with questions and she always has an answer. She understands how we operate. You all may not know it, but Shelia Eley is a jewel.”

“She was on top of everything that was handed down by the AOC (Administrative Office of the Courts),” she noted.

Judge Grant also praised Eley for the important jobs she performs on a daily basis.

“When she calls me and asks what I think about a certain topic or a certain situation, I just turn around and ask her the same question,” he remarked. “Whatever the situation, she’s already got it handled. She doesn’t need to call me because I trust her decisions. She does things the right way. We’re so fortunate to have her. We’re not going to let her retire before I do.”

“It’s been 30 good years,” Eley said. “It’s been great, even with the merger of the two districts and then with COVID. It was a lot of work, but we made it happen. We’ve got good clerks; we’ve got great Chiefs [Magistrates]; and we’ve got good deputies to work with, all of you have made my job so much easier.”

And true to form as the court coordinator, as soon as Thursday’s event was over, Eley stressed to those gathered in the courtroom, “Alright….let’s get back to work.”