COMO – Tobias Hill has a “golden ticket” to Hollywood.

Hill, representing his hometown of Como on the national stage, made his first appearance on American Idol during the March 21 episode.

The 26-year-old musician performed “Knocks Me Off My Feet” by Stevie Wonder, accompanying himself on the piano while he sang. He then showed off a few of his dance moves as well. 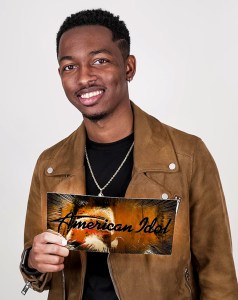 Tobias Hill of Como shows the golden ticket he earned thanks to his performance on American Idol. Contributed Photo

“I’m kind of wondering why he isn’t already a star,” Bryan remarked.

Perry noted that Hill seemed a bit nervous, but she enjoyed his performance.

“You have the stardust swirling all around you,” she said. “You really have all of the fundamental things that are necessary to build an American Idol. I’m excited for you, and I think you’re going to learn fast.”

All three judges gave Hill a “yes” vote to head to the Hollywood portion of the competition.

“I think you’re going to have to get a sub,” Perry said, referring to Hill’s job as a music teacher at Southampton Middle and High School. “It’s time to become the student once again.”

Hill is the son of Tyris and Brenda Hill. In a previous interview with the News Herald, he credited his grandfather, James Albert Long, Sr., as the one who taught him the foundations of music.

He’s a 2014 graduate of Hertford County Early College, and went on to earn a degree in music from North Carolina A&T University. In addition to his job as a music teacher, Hill also serves as the music director for Celebration Church in Franklin, VA, and office assistant at Helpful Hands Home Care in Murfreesboro.

“I want to put Como literally on the map,” Hill told the News Herald last week, adding that he’s competing to represent anyone from a small town with a big dream.

He also said he was grateful for all the hometown support he’s received while in pursuit of his star-studded music dreams.

American Idol’s next episode will air at 8 p.m. on Monday, March 28 on ABC.