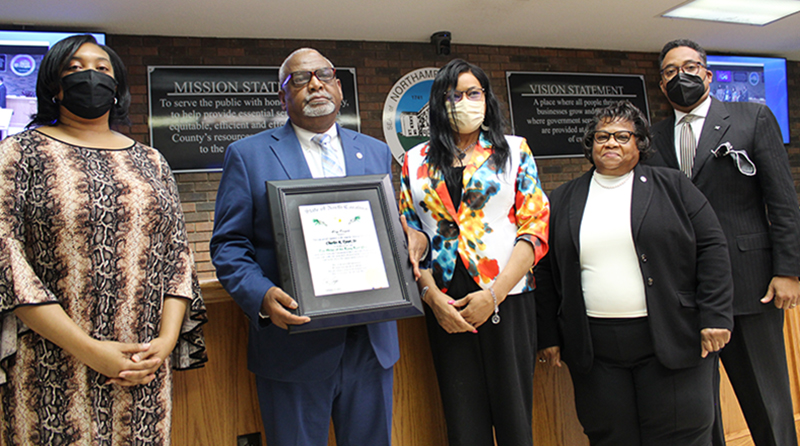 JACKSON – The Northampton County Board of Commissioners voted at their meeting here on March 21 to compensate Charles Tyner for his time as Interim County Manager.

Tyner, who is also Chair of the commissioners, served in the interim role from April 2021 until March 2022 when the county hired Julian Phillips for the position.

Though a salary increase for a commissioner serving as interim manager is allowed under state statute 153A-28 and 153A-84, Tyner initially did not receive any additional compensation. But Commissioner Geneva Faulkner, who serves as Vice Chair, made the motion Monday night to compensate Tyner in the amount of 65 percent of what would have been the county manager’s salary during that time period.

At the time of former county manager Charles Jackson’s resignation in April of 2021, he was being paid an annual salary of $95,000. Sixty-five percent of that amount is $61,750.

Faulkner praised Tyner’s hard work while serving as interim manager, noting the $14 million state allocation for the new courthouse construction as one example of that work.

Commissioner Nicole Boone provided the second to the motion, and the vote was unanimously in favor. Tyner recused himself from voting on the matter.

As previously reported by the News Herald, while Tyner served 11 months as Interim County Manager, the county also hired Robert Murphy in June 2021 to serve as an independent consultant until a new manager was hired. According to his contract with Northampton County, Murphy was expected to work two days per week and was compensated in the amount of $70 per hour, including travel time to and from his home in Rocky Mount.

At Monday’s meeting, Tyner thanked Murphy for his assistance over the past several months.

Prior to the compensation discussion, Faulkner also presented Tyner with the Order of the Long Leaf Pine on behalf of Gov. Roy Cooper. The award is for exemplary service to the state and the community that has made a significant impact.

Tyner expressed his gratitude for the recognition.

To wrap up his service as interim county manager, Tyner submitted a series of recommendations about current projects for County Manager Phillips to push forward with.

Those recommendations include continuing to work on the wastewater/sewer line project from Gaston to Lake Gaston, seeking funding sources to assist in completing that project, seeking funding sources to assist in completing the Lake Gaston Wellness Center project, proceeding with construction of a new courthouse annex (funded by federal dollars), proceeding with the development of workforce housing (funded by federal dollars), and working with the Sheriff’s Office to develop a plan for Odom Prison.

Tyner explained that, in addition to state funding, the county will receive federal dollars from Congressman G.K. Butterfield’s office in the amount of $5 million for the courthouse annex (which will house more county offices) and $3 million for workforce housing.

The commissioners unanimously approved the recommendations.

Phillips, whose first day on the job was March 14, spoke briefly during the meeting to address the citizens.

“I’m just excited to be here,” he said. “I look forward to working with each and every one of you.”

He stated he can see how much the citizens care about Northampton County, and he doesn’t take that lightly.

Phillips currently resides in Gates County with his wife, Crystal. He previously worked as Senior Business Manager for the GEO Group/Rivers Correctional Institution in Winton for 20 years, with experience in executive level financial and operations.

He graduated with honors from the University of Bridgeport in Connecticut, with a Bachelor of Science in Accounting and Master of Business Administration. Additionally, Phillips also has a Bachelor, Master, and Doctor of Theology Degree from Christian Outreach Bible Institute, Fayetteville, NC.

He’s an ordained Elder and the founding Senior Pastor of True Vine Church of Deliverance in Gates. Phillips has five children and three step-children.

According to his employment agreement, Phillips will receive an annual base salary of $115,000. After a year of service, the county can consider implementing a performance bonus. He has also agreed to relocate his permanent residence to Northampton County by May 13, 2022.