Julie Shields: Saving lives, one pint at a time 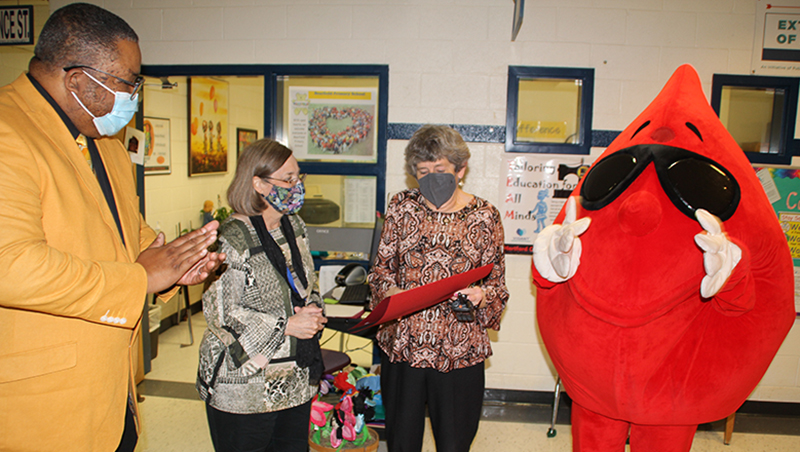 AHOSKIE – Over the course of a 40-plus career in education, Julie Shields has earned professional accolades as a classroom teacher and as an administrator.

But, on Tuesday morning, the Bearfield Primary School principal was handed a certificate that brought tears to her eyes as her mind drifted back to her teenage years where her now late grandmother encouraged her to become a blood donor.

The American Red Cross recognized Shields on Tuesday for reaching the 23-gallon blood donation level. Jo Anne Powell, Director of Outreach at Roanoke-Chowan Community Health Center (RCCHC) made the presentation on behalf of the American Red Cross. Powell said RCCHC has served as a partner with the Red Cross for more than 20 years, primarily as the sponsor of blood drives held several times a year in Ahoskie.

“I’ve been donating blood since I was 17-years-old,” said Shields shortly after accepting the certificate and Red Cross pin. “My grandmother, Mary Lipsitz, got me involved. She was big supporter of the Red Cross.

“I also need to thank my husband, David, for all his support to the Red Cross over the years. He was a regular donor as well up until the time he had to stop due to medical reasons,” she added.

“It use to be a process where you showed up and had to wait an hour or more, but now by using their rapid pass, it takes about 15 minutes,” she noted. “That allows me to wait until later in the day to go and donate a pint of blood.”

She also appreciates the fact that the Red Cross now informs the donor of where their blood went and how it helped a person in need.

“Of course they don’t tell you who that person is by name, but rather they share the story on how it helped that individual,” she said. “That’s pretty neat.”

Shields noted that the Red Cross allows regular donors to give a pint of blood every 56 days.

“I’ve remained on that same schedule all these years,” she said. “I prepare myself by watching what I eat and by taking iron supplements and vitamin B.”

“We appreciate all you have done over the years to support your community and the American Red Cross,” Powell said to Shields.

“Your secret is out now,” said Wright with a hearty laugh. “But on the serious side, we are so proud of having people working within our school district that are so community minded. Thank you, Mrs. Shields, for all you do to make our community such a great place to live.”

One of the Bearfield students who was exiting the school cafeteria as the ceremony was taking place was overheard saying, “Look, Mrs. Shields is famous.”

To learn more about becoming a blood donor, visit www.redcross.org.