Next stop: Hall of Fame

AHOSKIE – Over the course of his 40-plus year career with Hertford County Public Schools, Charles Simmons stands as a model of consistency as an educational colleague, a teacher, a coach, and an athletic director.

In two weeks, the rest of North Carolina will learn of his outstanding contributions to the development of young athletes. 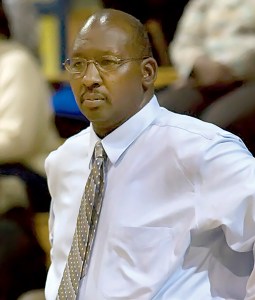 Charles Simmons has served as the Athletic Director at Hertford County High School since 1991. File Photo

Simmons will join four other men as the newest inductees into the North Carolina Athletic Directors Association (NCADA) Hall of Fame. Simmons, along with Ed Gilroy, Scott Jones, Jeff Morris, Mike Raybon, will be inducted during the NCADA Banquet at the Hotel Ballast in Wilmington on Monday, April 4.

“It’s always a great honor to be recognized by your peers and I am humbled and grateful for the award,” Simmons said. “The NC Athletic Directors Association does an outstanding job of supporting high school athletics working closely with NCHSAA and NCCA to ensure that students across the state have opportunities and access to athletic events that help them grow as student athletes and leaders.

“I’ve been coaching and working with athletics for my entire educational career and it has been incredibly rewarding to have had an opportunity to work with amazing coaches and players,” Simmons added. “Stepping into the shoes left by Coach Richard Murray was challenging, and I am forever grateful for his having worked with me to prepare me to do so. He continued to be a friend and mentor until his passing. I’d like to thank the Board of Education and the staff of Hertford County Public Schools as well as the community for their support during my years at Hertford County.”

Simmons is a native of Forest City, NC. After graduating from East Rutherford High School, he earned an AA degree in Health & Physical Education from Louisburg College (1975) and his BS in Health and Physical Education from UNC Pembroke in 1977. He attended ASU for additional graduate-level courses before accepting a position as a teacher in Hertford County Public Schools in 1981.

Simmons has received the following state recognitions: 2019 NCAAHPERD-SM School AD of the Year, 2013 NCHSAA Dave Harris AD of the Year, and the 2013 NCADA State AD of the Year. He was honored by being named an inductee to the East Rutherford High School Hall of Fame in 1993.

Simmons, who is nearing 700 wins as a high school basketball coach, resides in Ahoskie and is active in his local community. He is the proud father of Evan Simmons, a senior at Grambling State University.

The other four members of the NCADA’s 28th Hall of Fame induction class also made significant contributions to their schools.

Gilroy spent over 40 years in education. He taught for 12 years in New Jersey, and one year in South Carolina before starting his North Carolina years at Hoggard High School with the last 27+ years with the Pender County School system before retiring in 2019. He taught Social Studies and coached track & field, cross-country, football, basketball, and golf over that time.

He was recognized by the NCHSAA with the Region 2 Special Person Award in 2013 and has served on the NCHSAA Grant Committee for the last three years; served on the NCADA Board of Directors for four years, and received several awards from the NCADA. Those awards include Region 2 AD of the Year (2017), Athletic Director of the Year (2018), and Gerald McGee Award of Excellence in 2021.

Jones, a 1982 graduate of Camden County High School who played football at Western Carolina University, became the AD at his high school alma mater in 1994 until his retirement in 2015. He also coached the football team, compiling a 150-121 record over 21 seasons.

Morris has been serving in public education since 1995 when he began teaching and coaching with Colquitt County Schools in Moultrie, Georgia. After earning his Masters in Athletic Administration in 2004, Morris made the move to North Carolina where he began a career as an athletic administrator with Gray Stone Day School in Misenheimer, North Carolina. He served Gray Stone as a head soccer coach, director of athletics, associate director, principal, and head of school. Currently, he serves as the Head of School at Bethany Community School in Summerfield, North Carolina.

During his time as an athletic administrator, programs under his leadership accumulated more than 90 conference titles and four times was recognized with the conference’s Excellence in Athletics award given to the most successful program each year.

Morris also served on the North Carolina Athletic Directors Association Board of Directors and represented the NCADA on the NCHSAA Board of Directors. He served as president of the NCADA during the pivotal transition following the retirement of longtime Executive Director, Jerry McGee.

Raybon was first hired as a Special Education teacher at Ragsdale High School in Jamestown in 1965 where he started a wrestling program. He coached until 1984 during which time his teams won three State Championships, eight State Champions and two All-American wrestlers. During the years of 1972-1980, he served as Athletic Director and was also serving as Assistant Principal from 1972-1995. He was again named Athletic Director and served until his retirement in 2008.

In recognition of his service to the community and the school, in 2010 the gymnasium at Ragsdale High School was named the “Mike Raybon Gymnasium” in his honor. Also, the Guilford County Classic Wrestling Tournament has been re-named “The Mike Raybon Invitational Tournament”.

Each new inductee will be introduced by a special video presentation and will receive a commemorative NCADA Hall of Fame ring from Southern Recognition in honor of the induction. The NCADA Hall of Fame is the highest honor that can be bestowed upon an individual in the profession.