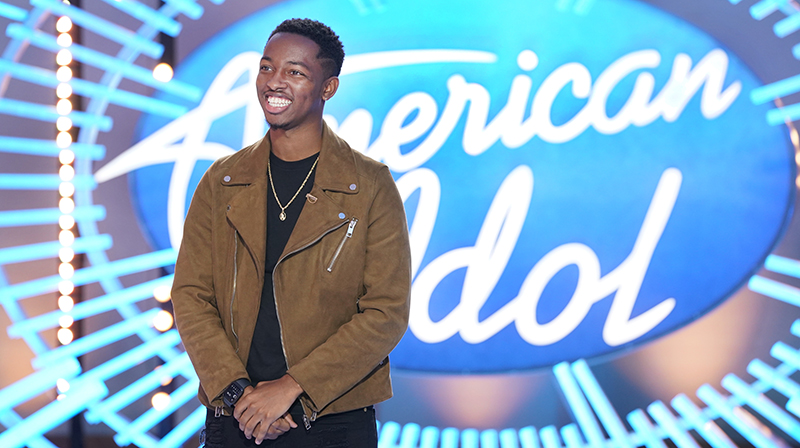 Como native Tobias Hill is all smiles as he stands in front of the legendary American Idol marquee. Hill’s performance on the popular talent search show is scheduled to air at 8 p.m. on Monday, March 21 on ABC. Photo by ABC/Eric McCandless

COMO – People tuning in to watch American Idol on Monday, March 21 will get to see Tobias Hill representing the Roanoke-Chowan area as one of the show’s hopeful contestants.

The fifth episode of this season will feature Hill’s audition in front of judges Luke Bryan, Katy Perry, and Lionel Richie for a chance to continue competing in the popular singing competition.

Hill is from the tiny town of Como, a place that he notes has “no stoplight, no grocery store, no gas station.”

“I want to put Como literally on the map,” Hill explained in an interview with the News Herald earlier this week.

With a musically-inclined family, Hill was surrounded by music from an early age.

“Everybody either sings or they play an instrument or they’re going to be banging on some pots and pans sooner or later,” he said with a laugh.

Hill credited his late grandfather, James Albert Long, Sr. who sang with local quartet The Mighty Bells of Joy, as the person who taught him the foundations of music. His parents, Tyris and Brenda Hill, sing as well.

He likes a wide variety of music genres, from country and gospel to R&B and jazz, and everything in between.

It was no surprise that Hill chose to pursue a music degree with a concentration in voice when he attended college at North Carolina A&T University. He studied under Maestro Travis Alexander and vocal coach Sonya Bennett Brown.

“I saw him as a mentor,” Hill said of Maestro Alexander. “He definitely brought out the artist that you all get today, and hopefully the artist you all see on the audition. He saw the potential. He took me under his wing, and he just cultivated me and developed me. I’m so grateful and so thankful.”

“If I can get a yes [from the judges], that means I’m just one step closer to achieving this dream of becoming a huge entertainer,” he admitted.

Hill said that people have been encouraging him for years to audition for the show, but in the past, he felt like maybe he wasn’t ready and he worried about rejection. A friend, however, sent him information about the most recent audition opportunity, and he decided it was time to take a chance.

“It’s always good to have a good support team,” he added.

At times, he said it’s felt like the entire population of Como – all 90 residents of the close-knit town – have knocked on his door to share some encouragement and wish him good luck.

Hill said he’s competing to represent anyone from a small town who has a big dream, and he hopes he’ll make his late grandfather proud.

“I’m a singer, I’m a dancer, I’m a songwriter, I’m a producer. I try to do it all. I really would like everyone to support me on March 21,” Hill concluded.

American Idol’s final auditions come to a close during the episode which will air at 8 p.m. on Monday, March 21 on ABC.