(Editor’s Note: This article and photos, published with permission of the News and Observer, features Bobby Outlaw, a native of the Ahoskie area, and his wife, Tracy, a native of Windsor, who now reside in Raleigh where they operate a bakery.)

RALEIGH – During the Great Recession, the last time the world broke down, Tracy Outlaw was laid off from her accounting job. It was a moment begging for the comfort of a bit of sweetness, and desserts were something Outlaw knew how to do. 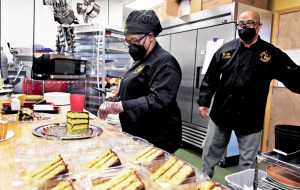 The accomplished home baker started making cakes, mostly as a pastime. But then as a lark, her husband, Bobby Outlaw, started selling and marketing them. Within six months Premier Cakes was born.

“Originally it was just something I love to do,” Tracy Outlaw said. “It warms my heart to see a smile on people’s faces when they try my cakes.”

Married for 40 years, the Outlaws live lives of exactitude. Tracy’s previous career was in accounting and Bobby was an engineer. In Premier Cakes they’ve found the sweet side of precision, that when sugar and flour and buttermilk and eggs combine in certain amounts, plus a little heat and time, the result could be a red velvet cake, rich and moist, a Southern classic with a distinct tang.

“He stays in the front and I stay in the back,” Tracy said. “We had to learn that, we both know our places.”

In the early days, Tracy would bake a series of cakes in the morning and Bobby would hit the road selling them, delivering orders to hospitals and offices and swinging by barbershops and parking lots to see if anyone was in need of cake. Someone always was.

Over two years, Premier Cakes outgrew its home kitchen, becoming a full-service bakery needing commercial ovens and fridges to handle the sizable demand. In the pre-COVID days, Premier made thousands of cakes per year, baking and selling at least 25 per day on a typical weekday. 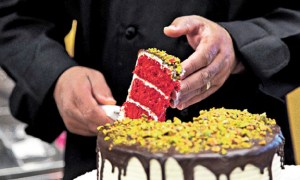 Bobby Outlaw cuts slices of the red velvet cake before opening. The bake shop often has a line of customers at the takeout window. News & Observer photo by Juli Leonard

After decades of baking for her family at home, Tracy Outlaw developed her cake recipes by devouring hundreds of cookbooks, checked out by the handful from the North Raleigh Regional Library. She’d compare a dozen red velvet cakes, or coconut cakes or pound cakes, and slowly edit the results into perfection, taking the best parts of each recipe until she’d make one that felt like hers. Sometimes it would take 10, 20 or 30 bakes.

“I’m self-taught,” Tracy Outlaw said, noting her specialty is old-fashioned Southern Cakes. “My mother was a baker, but she didn’t teach me. Maybe that’s why I can do it, though- it’s in me.”

When the pandemic hit in early 2020, Bobby Outlaw said Premier Cakes was beginning to settle into the rhythm of a neighborhood institution, known as the bakery for parties or weddings or a slice of Jamaican rum cake, which sells out every day. But the pandemic put a halt to the moments where cakes often appear, those parties and weddings and casual celebrations paired with icing. For Premier Cakes, that’s meant losing all of the bakery’s staff and cutting hours to three days a week. The Outlaw’s bakery is still standing, though, and they said those cake moments are starting to return.

“We had just gotten to the point where we could really be profitable before COVID,” Bobby Outlaw said. “That really hurt a whole lot. But it gave us time to revamp the business, to take a closer look at it. It’s picking back up slowly but surely.”

The top seller is hummingbird cake, but Tracy Outlaw said red velvet is her favorite, made with a cream cheese frosting. The case will often boast a sweet potato cake or an old-fashioned chocolate, perhaps a tiramisu or Quatro leches, Premier Cakes’ spin on the traditional Latin American cake. There are coconut cakes, of course, and, despite the name, even pies like pecan and sweet potato.

“But cakes are our forte,” Bobby Outlaw said. “Everything we bake is delicious.”

Hours: Wednesday- Friday Noon-6 p.m. or whenever they’re sold out

(Drew Jackson is a reporter for the News and Observer in Raleigh.)