Virginia was born in Rich Square, North Carolina on December 26, 1934, to her mother, Edna Taylor Downing. She was an only child and was raised for most of her childhood in the loving home of her grandparents, Indiana and Tossie Taylor, Sr., both deceased, along with her uncle, Tossie “Jack” Taylor, Jr. – d. She and Jack were inseparable, and it was in that home that Virginia blossomed, gaining confidence, excelling in school, and learning to be a ferocious advocate for those in need. She attended W.S. Creecy Elementary and High School in Northampton County. 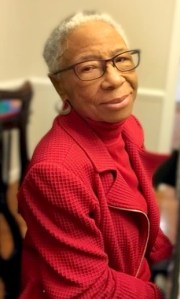 After Charles passed in 1996, Virginia continued advocating to improve peoples’ lives by becoming politically active. A bona fide trailblazer, she pursued and won a seat as a Northampton County Commissioner in 2000 and remained the people’s choice for 16 years, eventually becoming Chairwoman. Virginia eventually retired and lived a most comfortable life in Rich Square. In recent years, her medical issues prompted a move to the Durham area to be closer to her medical professionals and nearby family.

The family will receive visitors at Wilder’s Funeral Home located at 921 South Main Street, Rich Square, NC during the wake on Friday, March 11 from 2:00–5:00 pm (ET). A short program celebrating Virginia’s life will begin at 5:00 pm (ET). Those unable to attend can view a live stream of the program on Zoom Meeting ID: 956-515-7060. Visitors are required to wear masks and social distance. The funeral service will be private.

The family is thankful to all those who have reached out with comforting words and gestures of love. If you would like to donate to the NCCU Social Work Program, please use the link below to continue Virginia’s legacy in support of her HBCU and the wonderful young people who continue to pursue degrees in social work. Please add “In Honor of Virginia Spruill” in the comments box.