AHOSKIE – After 17 years living in public housing, Eunice Bond dreamed of owning her own home, but living in Ahoskie, with a population of less than 5,000 and an average income around $19,000 per year for a single adult household (only slightly over the state poverty level of $17,000), she knew it would be an uphill battle. 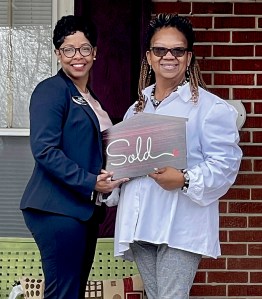 And in this hot real estate market, where would she find an agent to weather the ups and downs of the transaction process with her? Enter hometown girl, Stephanie Askew.

“I knew Ms. Bond because I grew up in Ahoskie, a small town where everyone just kind of knew each other,” Askew said. “I was initially hesitant to help her because since I live in Raleigh now, I should focus on the real estate market in Raleigh, but something just led me to say yes. I just knew it was for a reason. I grew up in an environment where home ownership was not the norm. Many people either rented or used government subsidized programs.”

Bond saved for two years to accumulate the money for her down payment and closing costs, and she was pre-approved for a mortgage, so she was in a position to act quickly when the right house came along for her and her 16-year-old son.

However, as Askew stated, “In Ahoskie, there isn’t a lot of inventory, especially at Ms. Bond’s price point, so I knew it was going to be a challenge finding her the right house.

“There was a particular house that I had passed by many times,” Askew continued. “It was remodeled on the inside, and it was beautiful. I wasn’t 100 percent sure if she was going to like it though, because it didn’t have the full two bathrooms that she wanted. But when I showed it to her, she loved it!”

Not only was Bond new to home ownership, but this was also Askew’s first real estate transaction as a newly licensed agent.

“I learned so much through the process, from making an offer, to doing all the paperwork, etc.,” Askew shared about the experience. “I felt like I had just climbed the highest mountain that had ever been put before me.

“It was never even about compensation for me,” she added. “There were times she and I cried together over things in our personal lives, or times she was discouraged because she didn’t think things were going to work out, but her faith was strong. And I knew we were going to accomplish what we set out to do.”

“Our office is two hours away from Ahoskie, so every time she had to do a showing or an inspection, Stephanie was on the road, sometimes making a four-hour roundtrip drive just to complete a task,” said Mikaela Rojas, Broker/Owner of EXIT Realty Preferred Triangle. “Stephanie told me her goal in becoming a realtor was to help people, but more specifically she wanted to give back to her hometown community. Stephanie was able to get Ms. Bond into a house, under list price, under appraised value, and with a credit at closing that left her with some money in her pocket. That is truly an amazing thing to do in this hot seller’s market. She showed immediately that she was devoted to her client, no matter what the outcome would be, and that she cared more about her client accomplishing her goal of first-time homeownership, than she did her own desires.”

Word got around about Bond’s accomplishment and congratulations and well-wishes poured into both her social media channels and Askew’s.

“A lot of people were looking at Ms. Bond saying, ‘Well if she can do it, then I can do it too.’ In fact, the management company at her apartment complex reached out to us and asked if they could do a piece on her because they felt that her story was one that would also inspire a lot of other residents in public housing to pursue home ownership,” said Askew. “Mrs. Bond accomplished the American Dream, and I got to play a role in that. I will never forget her!”