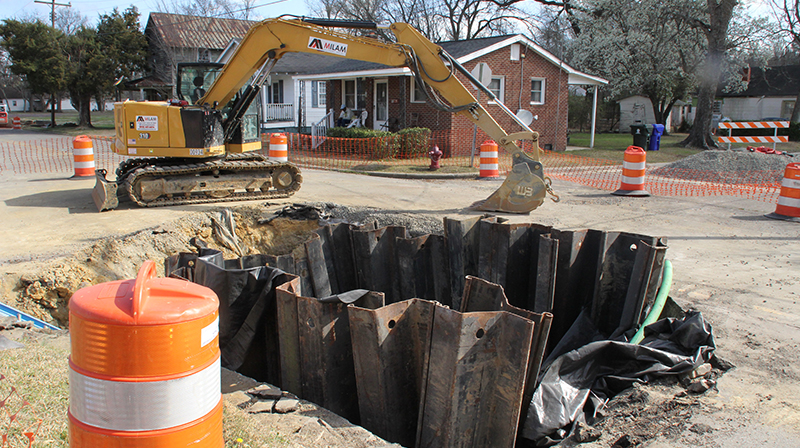 Work is underway by Carolina Earth Movers, Inc. of Greenville to repair a troublesome spot of Catherine Creek Road in Ahoskie that has been closed to thru traffic since July of last year. Staff Photo by Cal Bryant

AHOSKIE – Work is progressing on repairs to an Ahoskie road that has been closed to thru traffic for nearly 10 months.

Crews with Carolina Earth Movers, Inc. of Greenville are working daily to repair a troublesome area of Catherine Creek Road at its intersection with Hayes Street. The roadway at that particular spot, especially in the southbound lane, has been repaved on several occasions over recent years. However, a severe “dip” in the road will soon form there following those repaving efforts.

“It is an old brick manhole that has reached the end of its useful life,” said Clemmon W. “Win” Bridgers, Jr., Deputy Division Engineer for NCDOT Division One, in an earlier interview. “This manhole connects several storm drain lines that serve areas around Catherine Creek Road and Hayes Street.”

Bridgers said that due to the size of the manhole, the number of lines feeding in and out of it, and the surrounding sanitary sewer and water lines, NCDOT – who is responsible for the maintenance of Catherine Creek Road despite it being inside the Ahoskie town limits – designed a plan to fix the manhole.

“It’s an extremely complicated job with all the water and sewer lines, plus the storm water drainage lines intersecting at that one particular location,” said Ahoskie Town Manager Kerry McDuffie.

McDuffie added that through his correspondence with NCDOT officials, the work is still on schedule to be completed by May.

“We’re just happy that they’re working to fix the problems there,” McDuffie added.

Michael Hill, NCDOT District Engineer at the Ahoskie office, said the contract calls for Carolina Earth Movers, Inc. to have the worked completed by May 7.

“They will be done in advance of that date unless something crazy happens there,” Hill said on Tuesday of this week. “They should be finished by the end of April.”

NCDOT advertised the contract last fall, but there were no bidders.

“It was a case where what needed to be done to fix the problem was a job too big for a smaller sized contractor and too small for a bigger contractor,” said McDuffie.

That prompted NCDOT to hold an “on-site” review of the necessary repairs with interested contractors. That review attracted four bids, with Carolina Earth Movers, Inc. submitting the lowest bid at $154,050. NCDOT awarded the bid in January and will pay for the entire cost of the project.