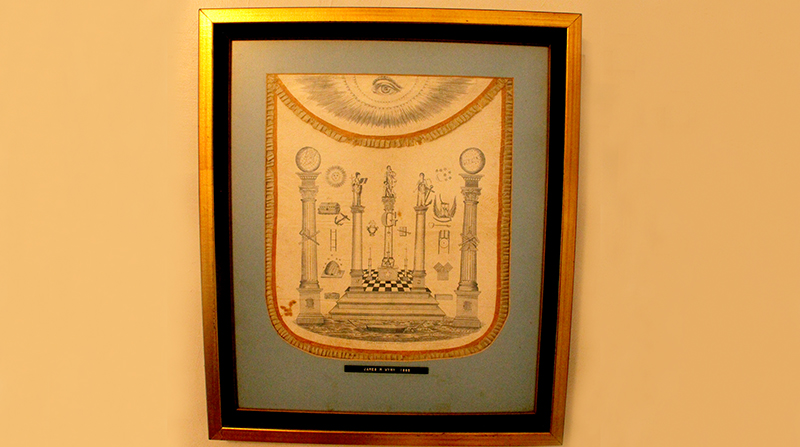 Thanks to this Masonic apron, now preserved in excess of 160 years, the town of Murfreesboro was spared from the Union Army’s torches during the Civil War. Staff Photo by Cal Bryant

Second of a two-part series

WINTON – What kept Murfreesboro from being burned during the Civil War, as Winton was?

This intriguing question was raised during a lecture, held last month at the Hertford County Public Library in Winton, commemorating the 160th anniversary of the Burning of Winton. The North Carolina Civil War & Reconstruction History Center (NCCWRHC) in Fayetteville and the Winton Historical Association, Inc. co-sponsored the lecture.

Murfreesboro resident Booker Daniel shared the answer to the aforementioned question in an oral history that has been passed down.

“A cavalry detail came to Murfreesboro on horseback with the intent of burning Murfreesboro,” she explained, noting this particular period (1862) during the Civil War. “This was a partially different group from the soldiers who burned Winton.

“They went to the Melrose House in Murfreesboro,” Daniel continued. “When Union troops took over a Confederate town or battlefield, they usually took a plantation home as a show of power. Melrose was the grandest house in town at the time. Its owner was Confederate.”

Daniel said none of the owners of the Melrose House were there when the Union soldiers arrived.

“Only the enslaved people were there,” she said. “When the Union officer, whose name is unknown, arrived at the Melrose House, he rode his horse into the foyer. He saw the Masonic apron on the grandfather clock and did not burn Murfreesboro because of the Masonic brotherhood – he was also a Mason. However, when he saw the eagle on top of the grandfather clock, he snapped it off and put it in his pocket, since it was a Union symbol. He supposedly said, ‘No rebel home will have a Union eagle in it’.”

Daniel’s relatives had passed down this oral history regarding that incident.

“My uncle, Richard Vann, moved into the Melrose House. He and his wife Lavinia raised their four children there. He served as Murfreesboro mayor and later as Hertford County Clerk of Superior Court,” she explained.

In a later interview, Lamar Van Brackle, Vice-President of the Board of Directors for the Murfreesboro Historical Association, Inc., shared more information on how Murfreesboro was spared.

“The Union troops came from Winton with the intent of burning Murfreesboro,” he noted. “Winton was the first Southern town burned in the Civil War. John Southall family’s owned Melrose at the time. They left when Winton was burned.”

“An expedition of 5,000 men left Winton. They came to Murfreesboro via the Meherrin River on gunboats,” Van Brackle shared. “They split, and a sizeable portion stayed in Murfreesboro. Murfreesboro had no troops here to defend it. The troops burned the cotton gin and other buildings. They took anything that was stored – bacon, sugar, ammunition. They took clothes when they entered individual residences.”

He added that in 1872, a cache of silver coins was found in the Meherrin River. According to the book, Trial Separation: Murfreesboro, North Carolina and The Civil War, copyright 1998 by Dr. Thomas C. Parramore, these coins were supposedly the loot taken when Murfreesboro was sacked in July 1863.

Steve Fowler, a member of American George Lodge #17 in Murfreesboro, shared this in a subsequent interview.

“Some Union soldiers were deserters,” he said. “Union troops took money and provisions from the Gatling farm.”

“I have only received seven stories from Hertford County, one from Bertie, four from Northampton, and zero from Gates. Oral traditions need to be accurate, and transcriptions must be of academic quality.”

NCCWRHC’s goal is to gather and record accounts/oral histories from across the state through the “Our State, Our Stories/100 Stories, 100 Counties” program.

The explanation on NCCWRHC’s flyer elaborates: “Our state’s story needs room to breathe because it extends beyond those four years of war and … cannot be neatly wrapped in Confederate gray. North Carolina’s enduring legacy is more like a quilt: A patchwork of blue and gray, white and black, and various shades in between.”

Story submissions can be emailed to Todd Molter at email address cheri@nccivilwarcenter.org.