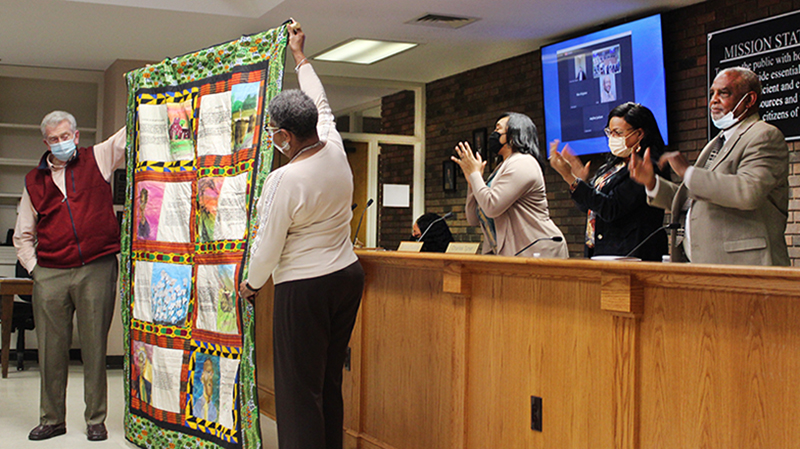 Dick Collier (left) joins with Lucy Edwards (second from left) to show the Black History quilt to those attending the Northampton County Commissioners meeting on Feb. 21 while three members of the board show their appreciation for the work of art. Staff Photo by Holly Taylor

JACKSON – Northampton County received a gift courtesy of the Northampton Cultural Arts Committee at the Board of Commissioners’ meeting here on Feb. 21.

That gift was a beautifully crafted Black History quilt, showcasing people and places that are a part of Black History in Northampton County.

The committee, which is funded by a Grass Roots grant from the NC Arts Council each year, works to bring all kinds of art to the citizens in the county. For Black History Month, the committee wanted to do something special.

“We decided we would like to have a Black History quilt painted and presented to you [the board of commissioners] tonight,” explained Judy Collier, Chair of the Cultural Arts Committee.

The project was coordinated by committee member Brenda Taylor, and the artist who painted the quilt squares was Mona Cunnikin from Suffolk, VA.

“I’m so honored to be a part of it,” Cunnikin said at Monday night’s meeting.

As the quilt was presented to the commissioners, Collier explained what each quilt panel represents. It included places such as Roanoke Salem Baptist Church, which was organized in 1866 and is located between Garysburg and Gumberry, and W.S. Creecy School in Rich Square, named after the school’s former principal William Spencer Creecy Sr.

It also included the history of peanut shocks and cotton, integral to the agricultural-based economy in the county’s past.

Additionally, several Northampton County trailblazers are included on the quilt squares. They are George Moses Horton, a poet originally from Rich Square who became the first African American to publish a book in the United States; Fannie Taliaferro Newsome, the first African American home demonstration agent in Northampton County and later a librarian at the local library; and the Roberts Brothers from Rich Square.

Watkins Roberts Jr. was one of the first town commissioners when Rich Square was incorporated. Winfred Roberts was the first Black postmaster in the town in 1886. And Exum Roberts was elected as Northampton County’s Register of Deeds that same year.

“A lot of great things have come out of Rich Square,” said Commissioner Geneva Faulker, who represents the town as a part of her district.

Collier explained that they’re in the process of getting a display case for the quilt, and once acquired, the quilt will be displayed at the Cultural and Wellness Center in Jackson.

The Northampton County Cultural Arts Committee was first formed in 2007 with the goal of bringing more art to the community, particularly to local students. Each year, they sponsor an artist to visit the local school district, and also coordinate several different events to showcase local talent to the public. The group is currently in the process of creating a barn quilt trail throughout the county as well.

For more information about the committee’s activities, visit nhcculturalarts.com