The primary election is May 17.

Hanig, a conservative Republican small business-owner serving his second term in the General Assembly, said, “It has been the opportunity of a lifetime to serve in the North Carolina House of Representatives and I want to continue to serve the people as their representative in the new third Senate District. 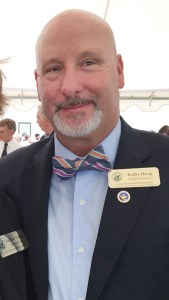 “I will continue to stand up for Northeastern North Carolina values in Raleigh,” he continued. “I am ready to get to work to earn the support of the people of this district, because District 3 deserves a representative who will fight for their best interest, not the best interest of those in Raleigh. What I have learned in my last two terms in the House has prepared me to be a strong and effective voice in the Senate. I will continue to serve Northeastern North Carolina with the same enthusiasm, dedication, and humility.

“I believe my voting record matches the values of the voters and I will continue to be responsive to my constituents,” he added.

Hanig said he takes pride in being a public servant.

“I want voters to know that they can reach out to me regarding the issues that matters most to them,” he stated. “I am excited to get to know the people of the new District 3 and look forward to working together to protect the values we as North Carolinians hold most dear.”

In addition to serving as Chair of the Local Government Committee, Hanig also serves as the Chair of the Marine Resources and Aquaculture Committee in Raleigh, along with serving on the following House committees: Appropriations, Appropriations Education, Education-Community Colleges, Elections and Ethics Laws, Health, Homeland Security, Military, and Veteran Affairs.

After serving in the United States Army, Hanig settled in Currituck County where he’s lived for over 25 years. He is a self-made small business owner who founded two separate businesses, and he grew a one-man operation into a business that services roughly 400 properties in the Outer Banks area.

Prior to his service in the NC House of Representatives, Hanig was the Chairman of the Currituck County Commission.