GATES – Imagine losing both of your parents to tragic causes before reaching age 11.

Imagine being in the second grade and the target of an unforgiving bully.

Imagine experiencing loneliness after leaving the city and moving to a rural environment.

Now imagine overcoming all of those potholes along life’s highway and becoming a published author prior to becoming a teenager while maintaining a career ambition to obtain the highest office in the land – the President of the United States.

The fifth grader at Buckland Elementary School is no stranger to mental and physical anguish. His mother, Robin, died of a sudden heart attack when Kaden was only five-years-old. Then, in February of last year, his father, Keith, was killed as the result of an auto accident. In between, a bully slammed Kaden’s head into a classroom floor at a school in his hometown of Elizabeth City. 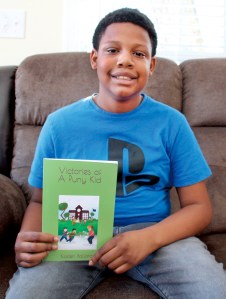 Kaden Ballard is a published author at age 11 with his first book – Victories of a Puny Kid – a story of being bullied as a child. Staff Photo by Cal Bryant

Somehow, Kaden managed to reach deep inside himself and move forward. Perhaps part of that emotional recovery can be credited to his gift as a storyteller, which includes his book – Victories of a Puny Kid – that was released in October of last year.

“I had to grow up pretty fast,” said Kaden, who now resides – along with his six-year-old sister, Aaliyah – with his grandparents, Otis and Gloria Ballard, at their home in the Gates community.

Kaden attended elementary school in Pasquotank County through the second grade. A few years after the death of his mother, he lived with his grandparents during the weekdays and started school as a third grader at Buckland Elementary in Gates County.

“Kids are pretty cool at Buckland,” Kaden shared, adding that it took some time to adjust to living in a rural setting. “Before coming here, I was living in Elizabeth City, so there were more kids to hang around with. My biggest complaint about living in Gates County is they need a WalMart here….and a Food Lion, and a Lowes.”

Another shortcoming for a “newbie” to Gates County is that he didn’t start school with his classmates of today.

“When you come in in the third grade and everyone else has known each other since Kindergarten, it put me at a disadvantage,” Kaden stressed.

However, with his outgoing personality, Kaden made plenty of friends.

“It didn’t take me long [to make friends],” he said. “And when a new kid does come to our school now for the first time, I reach out to them first. I remember how that felt.”

He enjoys all his classwork, saying Social Studies is his favorite subject. He missed being in school for the majority of his 4th grade year due to the COVID-19 pandemic.

“I hope we don’t have to go through that again,” Kaden remarked. “I missed being with my friends, and I missed being in the lunchroom, especially going to the big freezer and picking out what kind of ice cream I wanted.”

Kaden said Amy Hall is his favorite teacher at Buckland. He has her for homeroom and she also teaches Social Studies and Science.

For a hobby, Kaden enjoys stop motion animation, a filmmaking technique in which objects are moved slightly between individual photographs. When those photographic frames are shown in sequence, the objects take on an appearance of movement.

“I can do it with an app on my phone, which I place on a tripod,” he explained. “It’s pretty cool.”

He’s also enjoys art with the main focus being drawing cartoons. As an author, Kaden wants to write a series of books based on his life since arriving in Gates County. Along that line, he wants to incorporate his cartoons within those books.

“I want to start with being here in the third grade, then the next book will be the year we missed because of the virus….I plan to name that one ‘Quarantine Style.’ Then the next one will be going back to school and getting readjusted all over again. I can relate to all of this because I lived it,” he said.

Another idea for a book will be his experiences during the summer of 2021. He called it a “roller coaster ride” – visiting a beach in Delaware where he had an adventure with two hermit crabs; enrolling in a week-long robotics camp in Elizabeth City; and traveling to Greensboro where he learned about the famous February 1960 protest of a segregated lunch counter at Woolworth’s Department Store.

“I’m also thinking about a two-part book series based on what’s happening with me this year,” he said.

As for Victories of a Puny Kid, Kaden also used a life experience as the premise to the book.

“I use to get bullied in school, before I got to Gates County,” Kaden noted. “I was just sitting in class, in second grade, where some random kid, who apparently didn’t like me, slammed my head into the floor. It hurt really bad. I don’t know what I did to provoke him.”

Approximately one year later, Kaden decided to write the book.

“I actually started out with the name of Struggles of a Puny Kid, but I changed it to Victories because the character in my book stood up to the bully,” he said. “I guess that’s my way of overcoming my experience with a bully. I should have stood up to it rather than getting pushed around like a rag doll.”

He started writing the book during the winter break from school in 2019 and finished it by Thanksgiving of the following year. However, 2020 was when COVID-19 invaded the world, thus delaying the publication process of the book. It was finally released in October 2021.

“About three months after I started writing it, a virus happened and you put everything to the side and focus on how to not get sick and die,” Kaden stressed.

Victories of a Puny Kid is published by G-Square Publishing of New york, NY. Kaden’s uncle, Vincent “Vinny” Green, is the CEO of that firm.

“When Kaden was nine-years-old he shared with me his desire to author his own book,” said Green. “During my visits to North Carolina, he and I would discuss the direction that he wanted his book to go. He would send me several drafts of his work and we would discuss improvements that could be made, taking great care never to change his intended story line.”

Like Green, Gloria Ballard was there to support her grandchildren in their time of need.

“They both went through a bad time; the world seemed to stop turning,” she stressed. “But you put your trust in the Lord and you move on. Kaden did. He turned to his writing as a way to cope, and he and Aaliyah had a lot of support from both sides of the family.”

The book also allowed Kaden to share advice to other children about how to handle being bullied.

“You have to be witty about it, but you also need to do something about it, like tell someone,” he said. “A bully wants to think that they’re in control. And once they have control, they walk away and leave you scared of when they might come back.”

For the future, Kaden has more than one career goal in mind. Topping that list is holding the highest office in the land.

“I want to be President of the United States of America,” he boldly proclaimed. “And while I’m the President, I also want to be in the movies. I want people to say that I’m the best man they ever met.”

“There’s nothing wrong with being ambitious,” noted his grandmother. “Kaden is very talented and he loves to entertain. He’s an amazing young man to have experienced everything he’s gone through over the past few years. I ask everyone to keep him, his sister, and our entire family in their prayers.

“His dad told Kaden and Aaliyah that they can be anything they want to be. Keith and Robin are watching over them,” Mrs. Ballard added.

And what they see from the heavens is nothing short of what they imagined for their children.