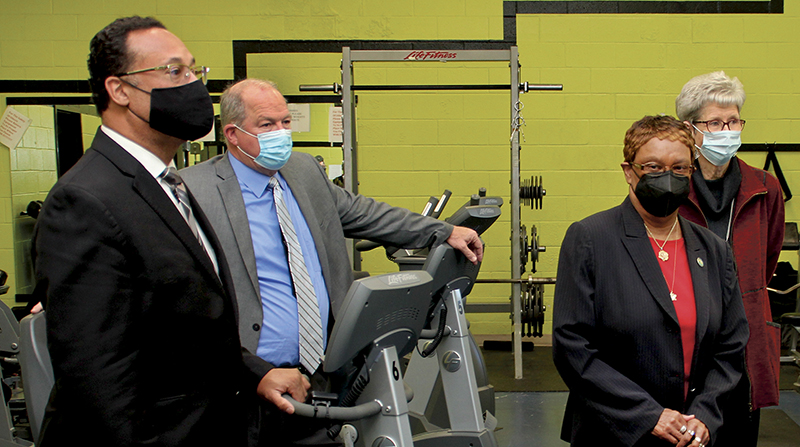 State House Representative Howard Hunter III (left) is joined by Gates County Commissioners Jack Owens, Dr. Althea Riddick, and Linda Hofler (right) as they visit the weight room at the county’s Community Center. Hunter was able to negotiate $250,000 in the state budget for renovations to the Center. Staff Photo by Cal Bryant

GATESVILLE – Howard Hunter III stands steadfast to his mantra of serving the people before serving his political party.

Hunter, who represents the 5th District in the North Carolina House of Representatives, was one of only a handful of Democrats who, early in the negotiations, cast their votes in favor of the state’s new budget.

Now, several months after its passage, Gates County and the rest of Hunter’s 5th District are reaping the rewards of the state budget.

“I voted for the budget because it was good for northeastern North Carolina,” Hunter said during last week’s scheduled meeting of the Gates County Board of Commissioners. “There were nine Democrats who initially voted for this budget. We asked the Governor to come to the table to negotiate and he did. The budget then passed overwhelming with a bipartisan vote.

“My affirmative vote, as well as those of my legislative colleagues, on the state budget will bring an unprecedented amount of funding to the District in the way of capacity, planning and infrastructure grants to local governments and non-profits in the amount of $4,220,000. Over $250,000 of that is for Gates County,” Hunter added.

Gates County local government will be receiving a check in the amount of $250,000 for the Community Center. There is an additional $20,000 in the state budget for the Gates County Sheriff’s Office to use to purchase body cameras for their staff.

“Representing Tier I and Tier II counties where residential taxes make up over 50 percent of the county’s tax base, I am fully aware that every penny counts and is utilized primarily for mandated services, thus making planning dollars mostly non-existent,” Hunter stressed. As a Budget Conferee, we were able to successfully negotiate funds to assist local governments and non-profits in building capacity to position themselves for additional grant funding in recreation, water/sewer infrastructure, downtown revitalization, etc.

“I encourage you, the elected leaders of Gates County, to get your priority projects to me as early as possible so I can work on them for possible funding within the next state budget,” Hunter concluded.

Prior to attending the commissioners meeting, Hunter joined with several members of the board and other local county officials to tour the Gates County Community Center.