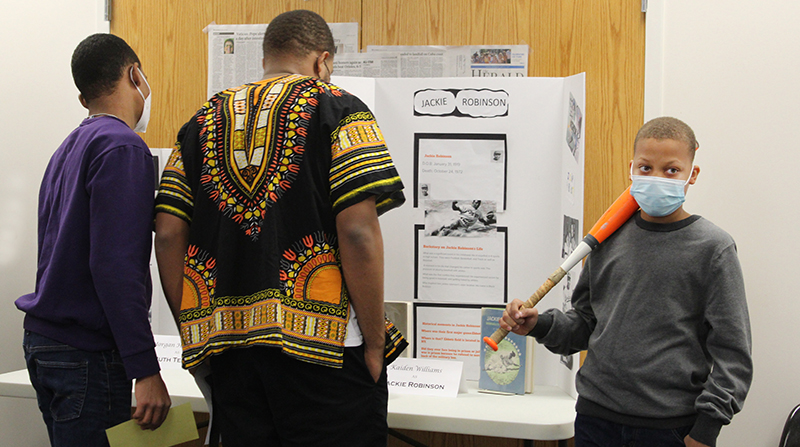 JACKSON – The Bishop Programming Room at the Northampton Memorial Library was transformed into a museum on Saturday, Feb. 19. More specifically, it was a ‘living wax museum’ to showcase the stories of famous African Americans throughout history.

The event was a part of the library’s Black History Month programming, serving as a way to get young people involved in learning.

“What better way for people to learn Black history than for the children to tell it,” explained Branch Manager Lillie Pernell. “By the children coming in and volunteering to research, they’re learning, they’re retaining it, and then they get a chance to share what they’ve learned to the public.”

Pernell explained that she first had the idea after seeing it done online. Working with her library staff, they decided it would be a good event to get the youth in the community involved in learning more about history. 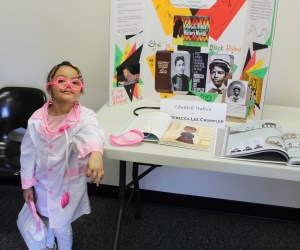 Chantell Walton dresses the part as she told the story of Dr. Rebecca Lee Crumpler, the first African-American woman to become a doctor of medicine in the United States. Staff Photo by Holly Taylor

On Saturday morning, the 19 young participants came dressed as the person they chose to portray. They ranged from sports figures such as Jackie Robinson and Gabby Douglas to writers including Maya Angelou and Langston Hughes. Some were important people during the Civil Rights movement; others were trailblazers that left their mark on history in other ways.

Each participant also put together a small trifold display containing information that they learned about the person. Once the museum was “open,” patrons had a chance to browse through and ask the children a few questions about each person.

Dawn Leseney, a retired local educator, volunteered to help the children prepare for the event.

“The hard work these kids have done is awesome,” Leseney said. “These kids are going to be learning for a lifetime. They’ve done a great job, and it just warms your heart to see this.”

Mildred Gatling, a Branch Assistant at the library, quoted Sojourner Truth as she encouraged everyone in attendance Saturday morning to check out the museum: “the truth is powerful and it prevails.”

“We are very proud of you all and the work you’ve done,” Pernell said to the participants. “There is still much work we must do in this world. You are our future.”

The participants ranged in age from young kids just starting school to teenagers.

Brigina Manley Walton brought her daughter Chantell to participate in the event. Together they learned about Dr. Rebecca Lee Crumpler who was the first African-American woman to become a doctor of medicine in the United States.

“I was so happy that everything turned out wonderful, and I’m happy the program was a success,” Manley Walton said afterwards.

She also had a niece and nephew participate as well, and said they were all excited about dressing up and taking part in the event.

“I’m so glad the library decided to do this program. Black History is American History,” she added.

Following a visit to the museum, patrons had the opportunity to stop by the “gift shop” as well, operated by Branch Assistant Rebecca Storey. Proceeds from purchases there benefitted the library so they can continue providing more programming in the future.

Others who took part in the event on Saturday included Jaylen Lashley, who played the saxophone, and Joe Harris Jr., who read Martin Luther King Jr.’s “I Have a Dream” speech. Stephanie Tillery, from the local Alpha Kappa Alpha chapter, also donated informational books on the Harlem Renaissance on behalf of the sorority.