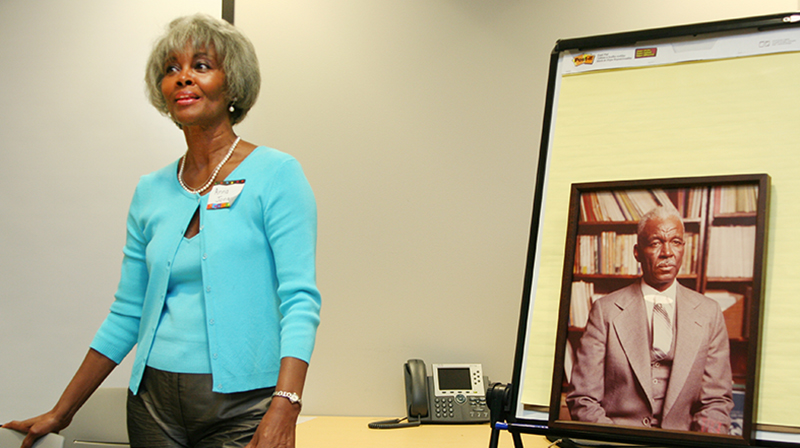 Anna Jones stands with a portrait of her late father, James H. Jones, in May of 2012 at an event held in Jackson where a film on the legacy of Mr. Jones was previewed. File Photo

JACKSON – The work to bring a new historic marker to Northampton County took a step forward this week when the county’s Board of Education approved a request to host the marker on their property.

The marker will honor the late James H. Jones, a former member of the Northampton School Board who made a big impact on local education during the Civil Rights movement.

Current board member Lucy Edwards presented the information to her fellow board members on behalf of Jones’ daughter, Anna, at their regular meeting on Feb. 14.

“Mr. Jones led the school integration movement in the 60s and 70s,” Edwards explained. “I am honored to have been a part of that and to witness that. He helped to maintain peace between the races during those turbulent times.”

Jones, who was also a farmer, was the first African American to serve on Northampton’s Board of Education beginning in 1971. He broke another barrier in 1981 when he became chair of that same board, the first Black person to hold that title in the state of North Carolina. He served in that role until his untimely death in an accident in 1984.

In 2014, he was posthumously inducted into East Carolina University Educator’s Hall of Fame.

Edwards explained that Anna Jones applied for a NC Civil Rights Trail marker, originally intending to place it at her father’s residence. But the committee deferred the application, pending a different location.

“They want the marker to be installed at the Northampton County School administration building where it will be accessible to far more students, citizens, visitors, and researchers,” Edwards stated. “And it will also link better to Mr. Jones’ history on the Board of Education.”

She also noted that this would be the first marker of any kind to recognize an African American in the county.

There will be no cost for the marker, which is funded through the William G. Pomeroy Foundation. The local board, however, would be responsible for the installation.

“I am honored to have presented this. I knew Mr. Jones, and had many conversations with him,” Edwards said at the end of her presentation. “Also, my husband served on the board with him while he was a Northampton County board member. He was a mentor to my husband.”

Edwards then motioned for approval to host the marker at the requested site, and board members Tony Burnette and Dr. Marjorie Edwards both seconded. The vote passed unanimously in favor, though one member was not present.

Burnette and Board Chair Rhonda Taylor both expressed gratitude to Anna Jones for her work over the years in telling her father’s story, including the 2015 documentary film entitled “Chairman Jones – An Improbable Leader” that she produced.

“I just want to thank you all for giving me this opportunity and being so gracious about approving this request,” Jones said, speaking briefly to the board. “I think that Northampton County needs to be on the map.”

The NC Civil Rights Trail project is a partnership between the NC African American Heritage Commission, the NC Office of Archives & History, and Visit NC to tell both the well-known and unsung stories of the Civil Rights movement across the state.

The first markers in the program have already been installed, including one in the Roanoke-Chowan area at New Ahoskie Baptist Church, recognizing the place where many leaders often gathered to push for change against racial oppression.