The local law enforcement community is mourning the death of one of their own. 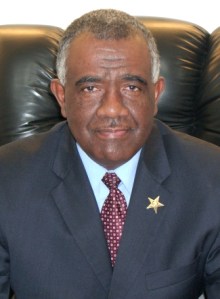 Current Northampton Sheriff Jack Smith praised Sheriff Vincent for his 40 years of dedicated service to the citizens of Northampton County and the State of North Carolina.

“He will be truly missed,” Sheriff Smith said. “I ask for everyone to please keep the Vincent family in your thoughts and prayers during this difficult time.”

Vincent began his law enforcement career by serving as a security guard with the Migrant and Seasonal Farmworkers’ Association in Rich Square back in 1977. In 1979, Vincent completed his Associate Degree in Criminal Justice at Halifax Community College. He was hired that same year as a Special Deputy by the Northampton Sheriff’s Office, working his way up through the ranks by serving as a Patrol Deputy, Civil Officer, Detective, and Chief Deputy. He went on to being a Probation and Parole Officer and later Chief of the Garysburg Police Department before running for Office of Sheriff.

Sheriff Vincent is survived by his wife, Betty, and three children.

Funeral services will be held at 11 a.m. on Tuesday, Feb. 22 at Gaston Missionary Baptist Church. Sheriff Vincent will lie in state at the church one hour prior to the service and may be viewed at that time.

Burial, with military honors, will follow the service at Crestview Memorial Cemetery in Roanoke Rapids.

Ahoskie man sentenced to nine years in prison for…