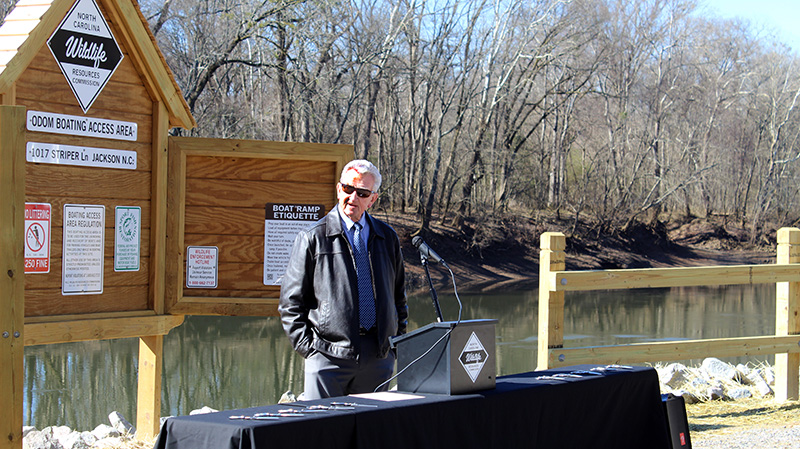 Dick Collier, Director of Northampton County’s Tourism Development Authority, was among those taking part in a ribbon-cutting ceremony on Thursday that formally opened the new boating access area on the Roanoke River near the old Odom Prison. Since 1998, Collier has been one of the driving forces behind the effort to have the ramp built. Staff Photo by Holly Taylor

JACKSON – It’s been a long time coming, but Northampton County residents and visitors now have a new boat ramp to access the Roanoke River.

A ribbon cutting celebration, hosted by the North Carolina Wildlife Resources Commission (NCWRC), was held here on Feb. 10. The new ramp is located on Striper Lane, which is accessed via Bryantown Road near Odom Prison. 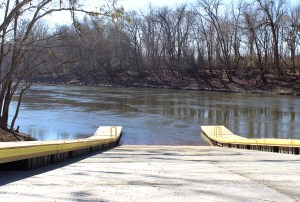 The Odom Boating Access Area has a double lane ramp with floating docks on both sides. Staff Photo by Holly Taylor

“The project took a lot longer than we ever anticipated,” admitted NCWRC Engineering Chief Gary Gardner, noting that the project began in 2018 in conjunction with developing the Odom Shooting Range.

That shooting range, also located on Striper Lane, opened in Dec. 2019, but record high river levels put the boating access project on hold until engineers were able to redesign and construct the ramp and surrounding access area.

The new public ramp is on the same site as a previous ramp which was used by staff at Odom Prison when that state facility was in operation. NCWRC partnered with NC Department of Public Safety (NCDPS) in order to make this public boat access a reality.

“This is what partnership looks like,” said Eddie Buffaloe, Secretary of NCDPS, during the ribbon cutting event on Thursday.

Buffaloe, who is a native of Potecasi, said it was essential to have this kind of access opportunity for Northampton County’s citizens, including his parents who still reside in the area.

“People without a vision will perish,” Buffaloe stated. “This cannot happen without boots on the ground, folks who make these things come together. So thank you for making this vision come true.”

NC House Representative Michael Wray also helped out with the completion of the boat ramp project, providing support as a legislator in the NC General Assembly.

“This is a great tool in the toolbox for the future,” he said, citing a positive impact on economic development in the local area.

“I’ve got a lot of great memories on this Roanoke River,” Wray continued. “We need to keep supporting sportsman, fishing, hunting, and teaching it to our children.”

Dick Collier, Director of Northampton County’s Tourism Development Authority, said he remembered participating in discussions about the need for a public boat ramp in the area as far back as 1998.

“We said we need a boat landing in Northampton County, and now we’ve got it. It’s here. It’s beautiful,” Collier emphasized.

Tommy Fonville, Vice-Chair of the Wildlife Resource Commission, thanked all the staff who had a hand in creating the boat ramp.

“It is absolutely first class,” he said.

“A lot of people come here and just see a boat ramp,” he continued, “but they don’t realize the years’ worth of work that goes into something like this.”

Christofferson also called the new boat ramp “a win for the public” in terms of public access to natural resources.

“This partnership and boating access area ensures that recreational boaters and fishers will have access to this stretch of the Roanoke River for generations to come,” he stated.

Northampton County Commission Chair and Interim County Manager Charles Tyner also spoke briefly to express his thanks to the people who worked together to complete the project. He added that the commissioners like to see things that bring more recreation opportunities and more people to the county.

The Odom Boating Access Area has a double lane ramp with floating docks on both sides. The site has 42 parking spots for vehicles with trailers, eight single car spots, two ADA single car spots, and one ADA trailer with vehicle spot. The parking lot will be paved later this year.

This boat ramp is situated between the Weldon access upstream and the Edwards Ferry (Scotland Neck) access downstream. It is the 249th boating access area managed by NCWRC.