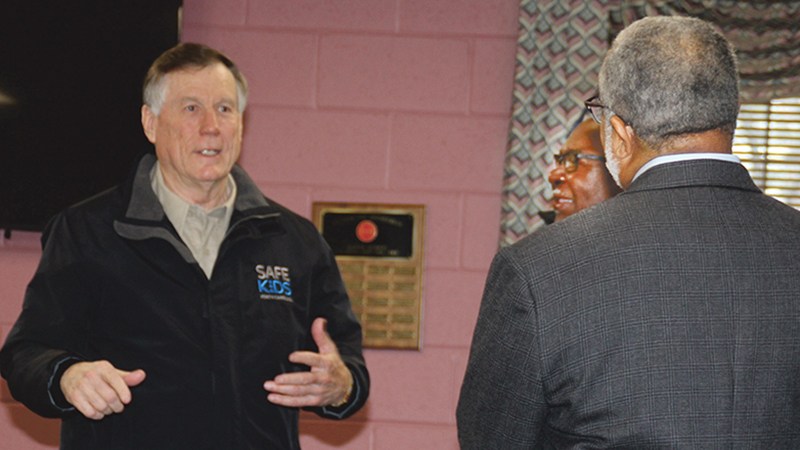 WINDSOR – Twenty volunteer fire departments across the Roanoke-Chowan area will benefit from funds provided through a $500,000 contribution made by Blue Cross Blue Shield NC to help firefighters in North Carolina.

Earlier this week, North Carolina Insurance Commissioner Mike Causey made stops in the northeastern part of the state to present $5,000 checks to several fire departments. One of his stops was at the Windsor Fire Department where Causey distributed funds to 10 volunteer fire departments in Bertie County.

“Thank ya’ll for what you do,” said Causey during his visit to Windsor.

Causey said he worked with Blue Cross Blue Shield NC in 2020 where the business donated $500,000 that was used to distribute one hundred $5,000 checks to least funded fire departments in the state.

“This year, Blue Cross did something different,” Causey noted. “They wanted to address the mental health component, using one-half of their donation – $250,000 – to help firefighters dealing with PTSD (Post-Traumatic Stress Disorder) and other issues so the firefighters wouldn’t have to pay out of their pockets for those mental health services. That left $250,000. With that we decided to maintain the level of funding at $5,000 but are only able to distribute them to the 50 least funded departments.”

Causey did inform the local firefighters and others gathered Tuesday morning in Windsor that the North Carolina General Assembly, using COVID-19 funds, is working on a plan that will allow fire departments across the state to apply for $10,000 grants.

“The state legislature also helped us on the matching grants where some of these lower-funded fire departments were having to match 25 percent of the money coming to them from the Department of Insurance,” Causey added. “That’s been changed to where those departments operating annually on a budget of $50,000 or less, they won’t have to provide a matching grant. That should be a big help.”

He also mentioned another round of grant funding was on the horizon to assist fire departments purchase needed equipment. Those grants will be for up to $35,000.

“Hopefully some of this money will help you offset the hard times you’ve had to deal with during the COVID situation, not being able to have fundraisers,” Causey stressed.

“This time there’s the most money in a budget in the history of the state of North Carolina,” Goodwin said. “A lot of money went to things like this [fire departments] and law enforcement, the ones that usually do not get that amount of money.

“If you feel that you aren’t getting your share of the money, then somebody isn’t asking for it; somebody didn’t put in a request, somebody didn’t ask for a grant,” Goodwin continued. “Don’t be afraid to ask.”

Bertie Commissioner Tammy Lee thanked the firefighters for the service they provide their communities.

“As a county, we cannot afford to have hired fire departments,” she noted. “As volunteers you all do a great service for our county.”

Commissioner Ronald Wesson thanked Causey and his staff, saying, “this means a lot for you to come to Windsor and present the checks in person.”

Wesson added, “When you talk about essential services and essential workers, I don’t know another term to describe the work these firefighters provide, not just to their individual communities, but to this whole county. They don’t get the credit they deserve.”

Commissioner Ron Roberson, a former firefighter in Lewiston Woodville, said he understands and appreciates the work of a volunteer fireman.

“We value all the service you provide to Bertie County; thank you for what you do,” said Bertie Manager Juan Vaughan II.