AHOSKIE – In January 2022, Roanoke Chowan Community Health Center celebrated the retirement of one of its longest serving and most beloved physicians, Dr. Julian R. Taylor.

Dr. Taylor’s father also studied at the now Wake Forest School of Medicine, but was unable to finish his education due to the Great Depression. Although Dr. Taylor states his choice to become a physician was not influenced by this, he does say, “My father’s own wish to be a physician was in the back of my mind as I planned to study medicine.” 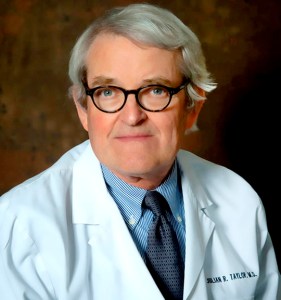 Mr. Taylor was naturally very proud of his son’s accomplishments.

Dr. Taylor came to Hertford County in 1974, after serving as a general medical officer in the United States Air Force at Shaw Air Force Base in South Carolina and completing a Family Medicine Residency at the Medical University of South Carolina in Charleston, SC.

He chose to work in Ahoskie through family ties –both of his parents were born in Hertford County (his father was one of its first health department sanitarians) and his wife, Jerrie Jenkins Taylor, is from Colerain – as well as a conversation he had with another physician at what was then Ahoskie Family Physicians, about the great medical need in the area.

“I did consider some other similar small clinics,” says Dr. Taylor, “but I was told by Dr. Charles Sawyer that if they needed me any worse than in Ahoskie, I ‘damn well’ better go there.”

Dr. Sawyer now considers Dr. Taylor “a close friend of many years.” Describing him as, “Not only blessed with a brilliant mind, but he has all the qualifications of a gifted family physician. His patient care and management is excellent.” And, “In addition to his medical expertise, he is a God-fearing Southern gentleman. “

When Dr. Taylor joined Ahoskie Family Physicians, it was a busy traditional family medicine practice where he cared for all ages, from newborns to the elderly, as well as practiced obstetrics. In fact, between the four physicians at the practice, there were 150-200 deliveries yearly through the end of October 1985. As the medical community in Ahoskie grew, the practice was eventually able to focus on adult primary care.

In 1993, Dr. Taylor left Ahoskie Family Physicians for several years to work in Rocky Mount as Medical Director and general staff physician of ambulatory care at Boice Willis Clinic, until he returned to Ahoskie in 2001.

Around the same time, Ahoskie Family Physicians was making the transition to becoming what is now Roanoke Chowan Community Health Center as a way to better meet the still substantial medical need in Hertford County. While there were more services available, cost still prevented many people from getting the care they needed. Federally Qualified Community Health Centers, like RCCHC, receive federal funding which allows patients to be seen regardless of their ability to pay, as well as access to the 340b discount drug program, which allows for lower prescriptions prices.

“Probably the best thing that ever happened in my practice life was when Ahoskie Family Physicians became a Federally Qualified Community Health Center.” says Dr. Taylor, “This brought unprecedented help to the physicians in the office.”

Of his work at the community health center, RCCHC CEO Kim Schwartz says, “It would be impossible to try and calculate the number of lives Julian Taylor has impacted in his brilliant career. I can say for our organization, his caring, kindness and remarkable medical skill has guided us to excellence in all standards of care.”

RCCHC Chief Medical Officer, Dr. Geniene Jones, agrees, saying, “Dr. Taylor has been a reminder to us all of what a Family Medicine doctor should be: kind, caring, intelligent, persevering and dedicated. I pray for him much rest and joy in this new phase of his career and life.”

Deborah Morrison, Chair of RCCHC’s Board of Directors, praises Dr. Taylor as, “A beacon of light in our health care community. We are grateful for his commitment and service to our health center and his patients. His dedication, service, and care will never be forgotten.”

The town where he practiced medicine for so long also honored Dr. Taylor’s legacy on January 12, 2022 when Ahoskie Mayor Weyling White declared it Dr. Taylor Day “for his vision and four decades of dedication to his patients and community in Northeastern North Carolina.”

Dr. Taylor will also be honored at the Feb. 21 meeting of the Hertford County Commissioners.

Former patient Ardie Parker of Como remembers Dr. Taylor as, “always having such a good bedside manner and always being so attentive. I remember over 40 years ago, when he took care of me when I was pregnant, how much I trusted him. I’ve always thought a whole lot about Dr. Taylor, and appreciate everything he has done for me and my family.”

In fact, Ardie’s daughter, Kristina Parker, with whom she was pregnant while under the care of Dr. Taylor, is now a Registered Nurse who joined Roanoke Chowan Community Health Center in 2013. After having worked together for eight years, she now considers him “a mentor and a dear friend.”

“Working with Dr. Taylor has been an honor, “ said Parker. “I have loved watching the interaction between him and his patients, and the way he lights up a room just by walking in it. He has taught me so much through not only his immense knowledge, but through his actions. He has the kindest and most generous heart, and is a great listener. I am a better person from being able to be one of his nurses. ”

Parker’s admiration for Dr. Taylor was reflected by many, including another longtime colleague, Dr. Michael Alston of Murfreesboro Primary Care,

“Dr. Julian Taylor has been a role model, mentor, and dear friend to me over the last 40 years,” noted Dr. Alston. “He has exemplified what a family physician should be throughout his career with his knowledge, his compassion and caring for thousands of patients. He will be greatly missed, but I wish him the best in his well-deserved retirement.”

Truly, although his retirement is clearly well deserved, the kindness, compassion and excellent care Dr. Taylor provided to Ahoskie and the surrounding area will be deeply missed by many.