In game one of Sunday’s twinbill, Everette tossed a complete game, two-hit gem as the Hawks won, 7-1. The lefty allowed one run off two hits and finished with eight strikeouts. 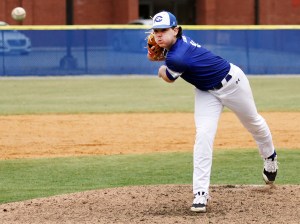 Carson Everette allowed just one run off two hits and fanned eight to lead Chowan to a 7-1 victory in game one of Sunday’s doubleheader at home vs. Kutztown. Photo courtesy of Chowan University

Ben Bausas picked up the loss in the nightcap despite allowing two runs (one earned) off three hits and five strikeouts in five innings of work.

Leading 3-0 in game one, Chowan doubled that advantage by scoring three runs in the bottom of the fourth inning. There, Caleb Karie opened the inning with a walk. Joshua James reached on a bunt single before Ty Johnson brought a run home reaching on an error. Winslow then doubled to right center and Evington hit a sacrifice fly to score Johnson.

Chowan pushed the lead to 7-0 in the bottom of the fifth inning as James drew a two-out walk. Johnson singled to left before James came around to score on a wild pitch and throwing error.

Kutztown broke up the shutout in the top of the seventh as a two out single after a lead-off hit-by-pitch Everette tallied a strikeout to end the contest.

In Sunday’s second game, Chowan squandered a couple of scoring opportunities and were dealt a 5-0 loss.

Betancourt singled to left center to open the bottom of the second. Aidan Palacios picked up a hit to put runners in scoring position, but the Hawks were unable to plate a run in the inning.

Chowan would load the bases in the bottom of the sixth with two outs but was unable to scratch a run across.

The two teams also split a doubleheader on Saturday. Chowan won the opener, 3-1, while Kutztown built an 8-4 lead in the second game before holding off the Hawks, 8-6.

Evington and Johnson led the Hawks with four hits each during Saturday’s twinbill. Carrington Williams came up clutch for the Hawks with two hits and four RBI. Jackson Dunlap tallied two RBI.

Shane Rademacher tossed a no-decision in game one with five strong innings allowing one run off four hits.

Chowan (2-2 overall) is scheduled to host Wheeling in a three-game series on February 12-13. First pitch of the doubleheader on Saturday is slated at 12 noon at Jerry Hawkins Field.