Cheick Traore cleaned up the glass for a program best 20 rebounds to help lead the Hawks to their fourth straight victory in a 74-62 win over Converse in Conference Carolinas action here Saturday afternoon. 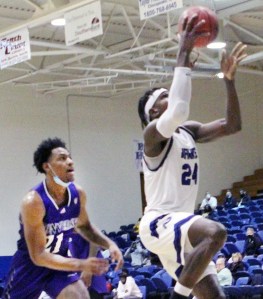 Cheick Traore (#24) drives to the basket during Saturday’s home game vs. Converse. Traore set a record for Chowan, as a D-II program, in that game by hauling down 20 rebounds. Photo contributed by Chowan University

It was a weekend sweep for Chowan as they rallied to defeat North Greenville, 77-74, on Friday night at the Hawks Athletic Center.

Chowan improved to 7-11 overall (7-9 in league play) with their two wins this weekend.

The Hawks tied a season-high with 21 assists on 27 made baskets.

Chowan never trailed, using an 8-0 run to open the game. Converse closed to within 20-18 before a three-pointer each from Chase Barnett and Askew got the Hawks rolling again. By the time Donavon Martin recorded a dunk, Chowan led 32-26.

The Hawks then used a 12-0 run – half of which came off three-pointers from Askew and Estime – for a 44-26 halftime lead.

The run continued for the Hawks into the second half as Estime knocked down a jumper to start the scoring. Koonce hit a pair from the stripe and a jumper before Traore picked up a point at the stripe to lead 51-26.

On Friday, the Hawks battled back from a double-digit deficit to pick up their fifth win in six games with a 77-74 victory over North Greenville.

Marcus Elliott paced the Hawks with 18 points on 4-9 shooting from deep. Chase Barnett tallied 17 points on 8-11 shooting and a career-high eight assists.