Destiny Robinson recorded her fourth straight double-double and tenth this season with 16 points and 10 rebounds in the win. Olivia Gaither chipped in with 12 points. Demetria Bland tallied seven points and five assists. 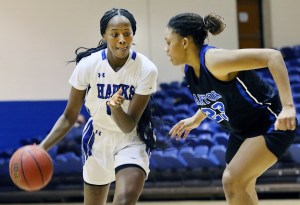 Destiny Robinson (left) had double-doubles (points and rebounds) in back-to-back games this past weekend as Chowan split a pair of Conference Carolinas games. Photo contributed by Chowan University

In Saturday’s game, Chowan trailed just once (12-10) before Brianna Copeland handed the lead back to the Hawks for-keeps with a three-pointer. Robinson posted back-to-back buckets to lead 17-14 at the end of the opening frame.

After Converse closed the gap to 37-34 in the early stages of the third quarter, Gaither got Chowan’s offense rolling with a pair of free throws and a jumper.

Later in the period, Chowan went on a 14-4 run and led 55-42 entering the final quarter of action.

Converse opened the fourth frame with a 5-0 run before the Hawks countered with a 10-0 run. Bland and Keibra Hopkins knocked down triples before Shequana Jackson and Hopkins added a pair of layups during that offensive outburst.

Chowan experienced a rocky ride offensively in Friday’s 70-57 loss to North Greenville. The Hawks shot 29.9% (20-67) from the floor, including being held to nine points in the second quarter.

Aniah Patterson led the Hawks with 16 points. Destiny Robinson posted a double-double with 13 points and 13 rebounds.

The weekend split left Chowan with a 12-6 overall record (12-4 inside league play).