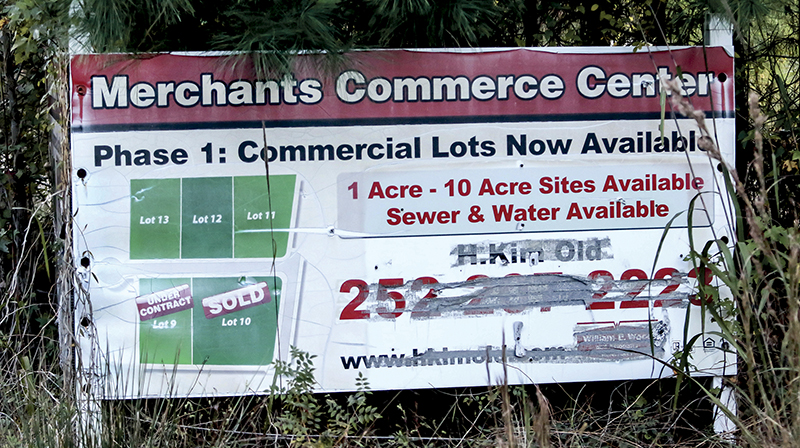 The Gates County Commissioners are currently studying a proposal to purchase property along US 158 near the high school for possible commercial development. File Photo by Charles Revelle

At their October 2021 meeting, the Gates County Board of Commissioners held a public hearing regarding a proposal to purchase that land for the purpose of economic development. The 145 acres currently up for sale is owned by Briarwood Forest Products, Inc. and is located within what once was the Merchants Commerce Center development, situated along US 158 adjacent to the State Employees Credit Union and Gates House.

At the October public hearing, the majority of citizens who spoke were not in favor of the land purchase.

“Since that time we have heard from some of our citizens that we need to reconsider,” stated Commissioner Jack Owens during the board’s most recent meeting on Jan. 19. “I, for one, think we need to revisit this.

“I got a call this week, regarding the land purchase, from a person who is not in favor,” Owens continued. “I was asked about the $1.4 million [in American Rescue Plan (ARP) money received by the county in the wake of the COVID-19 pandemic, with another $800,000 to come]. The reason none of that money has been spent is because of something known as the Final Rule. We’ve asked specific questions about that. The Final Rule comes from the Federal Government about how these ARP funds can be used. The Final Rule has been passed, but there’s a webinar that our Finance Director must participate in for updates on the Final Rule. We will learn then of how we can apply that money. That money is treated like a grant, we have to show how and why we need to expend it. You write it up like a grant and submit it to the Final Rule.”

Owens added that these types of funds may never again be available.

Of the two businesses – a branch office of the State Employees Credit Union and the Gates House (an assisted living facility) – currently operating within what once was known as Merchants Commerce Center, Owens said they combined to pay $37,000 in property taxes.

“These are the types of things that go into my decision-making process,” Owens remarked.

He added that prior to the COVID-19 pandemic, the majority of Gates County citizens, himself included, shopped outside of the county.

“When COVID hit, we stayed at home and shopped at Dollar General. Because of that, Gates County had the best sales tax [revenue] year it ever had in history,” Owens said. “So what does that tell me? If the things we shop for outside the county could be found here in the county, that sales tax scenario would be the same all the time.”

Owens added that the projected state sales tax revenue for the county for the current fiscal year (ending June 30) will exceed what is budgeted by $188,226. He also mentioned a one-acre parcel currently for sale adjacent to the State Employees Credit Union office. It’s listed for $130,000.

“Say it sells for $115,000; what does that make the price for every good acre on the land we’re looking at,” Owens surmised.

“I know all the things I’m saying sounds like a promotion of let’s purchase this land,” he added. “But instead of doing that, I’m going to say we need a little more homework done [on the land purchase proposal]. We have no control over what may be placed out there. Owning that property will give us that control and we can protect our sewer. I’m in favor of it, but I’m not in favor of making that decision tonight.”

Commissioner Ray Freeman also acknowledged hearing from the citizens about this proposal.

Commissioner Jonathan Craddock said of the county citizens he has spoken to about this issue, 60 percent are in opposition to the land purchase.

“But some of that 60 percent are saying they want to see a development plan for that property,” he said. “If we are going to spend money on economic development, let’s show them a plan.”

Commissioner Linda Hofler agreed with Owens regarding a delay in making a final decision.

“I’ve heard from citizens who are excited about this development and from those who are not,” Hofler stated. “I think that if we do this this same old way, we will get the same old results. We need to try to encourage people to come into our county and invest.”

Dr. Althea Riddick, chair of the county commissioners, asked, “If not that piece of property, then what’s the alternative property or properties that we can use to attract new business so we can expand the tax base of our county?

“Ten years ago there was a strategic plan developed for Gates County,” Riddick continued. ‘Here we are in 2022 and nothing was done with that plan. We don’t know what the future holds, but we need invest some of our ARP money into larger projects. Our sales tax base needs to grow in order for us to continue to pay the bills. Like me, everyone wants clean water, but nobody ever asks what it costs to treat our water. We still want to invest more in public safety and public health, but that takes more money. When the sales tax base doesn’t expand, we all know what that means. We can’t write grants for economic activity without land to show where that investment is going. Yes, we can write a plan…but where and for what?”

Riddick also asked the citizens to think about the economic development that counties adjacent to Gates are currently involved in. She mentioned projects that are now attracting millions of dollars in appropriations.

“They [other counties] bought the land for over $600,000 and tied it to projects; when they received the appropriations they reimbursed themselves for the funds they expended up front,” she stressed.

On a motion from Owens and a second from Craddock, the board delayed making a decision on purchasing the property until their next regularly scheduled meeting on Feb. 16.