JACKSON – In a brief special called meeting on Thursday, Feb. 3, the Northampton County Board of Education voted to accept a retirement agreement for Dr. Pamela Chamblee.

Chamblee previously served as Northampton County Schools Superintendent until she was suspended from her duties by the State Board of Education two months ago.

Board member Barbara Stephenson motioned to accept the agreement, and Lucy Edwards seconded. The vote was unanimously in favor by the four members in attendance. Tony Burnette and Theresa Scott, who both have previously expressed their support for Dr. Chamblee, did not attend. 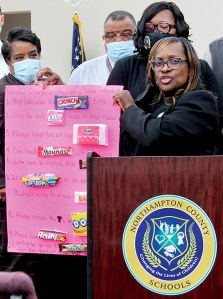 Dr. Pamela Chamblee (at podium) is shown with a few of her supporters at a press conference in December just prior to her suspension as Superintendent of Northampton County Public Schools. File Photo

There was no discussion about the agreement by the board before or after the vote. The meeting adjourned less than 10 minutes after it began.

The News Herald obtained a copy of the agreement which stated its purpose is “to resolve amicably and fairly the conclusion of Dr. Pamela Chamblee’s employment with Northampton County Schools.”

The agreement is between Dr. Chamblee, the local Northampton Board, and the State Board, which also took action to approve the document at their regular monthly meeting held this week.

According to the text, Chamblee agreed to voluntarily retire from employment with Northampton County Schools effective on April 1, 2022. Through the end of March, however, she will continue to receive her monthly salary and benefits she is entitled to under her July 2020 contract.

That contract, which was for a term ending June 2024, stated her salary for the first year of employment would be $145,000, an amount that is paid through a combination of state and local funds with the state funds constituting the majority of that. That initial salary was set to increase by a percentage adopted each fiscal year by the state for administrative pay.

In the retirement agreement, Chamblee also agreed “that she will neither seek nor accept employment of any kind with the Northampton County Schools at any point in the future.”

All parties involved also agreed not to hold any liability to take legal action against each other. There is a stipulation, however, that Dr. Chamblee remains entitled to continued liability insurance coverage already provided to her by the State and Local boards for any demands, claims, suits, actions, and legal proceedings brought against her related to any act or omission occurring on or before the date of the agreement.

This retirement agreement comes after action taken by the State Board of Education at their meeting in Dec. 2021. There the board unanimously approved a motion to suspend Dr. Chamblee with pay for a period of one year.

Northampton County Schools has been identified as a low-performing district for a number of years.

Dr. Del Burns, who has previously served as superintendent in a number of different districts across the state, was named as Interim Superintendent for the district.

Alan Duncan, Vice Chair of the State Board, attended a special called Northampton Board of Education meeting in December to explain the decision.

“This was not done lightly, nor was it done without much thought and consideration by many people. This was an important decision,” Duncan stated in December. “We cannot let adult issues get in the way of doing the very best we can for our children. We are deeply concerned yet very optimistic about the children of Northampton County, and their educational opportunity.”

Dr. Chamblee first stepped into the role of superintendent in 2019 following the departure of the county’s previous school superintendent. At the time, she had been employed with Halifax County Schools as the Executive Director of School Transformation.

Chamblee, whose education career spanned over 30 years, was no stranger to the district, having previously worked in Northampton County in various capacities, including principal at Willis Hare Elementary, Conway Middle, and the former Northampton County High School-East when the two public high schools merged into one.

In June 2020, the Northampton County Board of Education voted 5-2 to terminate her contract, after only a year as Superintendent. One board member cited a lack of trust and issues with the budget proposal and employee treatment, but did not elaborate any further. Many of those votes to terminate Chamblee’s contract came from board members who were concluding their terms after unsuccessful reelection bids.

When the new members of the current board were sworn in two weeks later in July 2020, they voted 5-1 to rescind her termination. No explanation was given for the reversal of the decision.