The junior forward from Portsmouth, VA tipped in a teammate’s miss just before the final buzzer as Chowan knocked off regionally-ranked and previously undefeated Mt. Olive, 70-68, in Conference Carolinas women’s action. 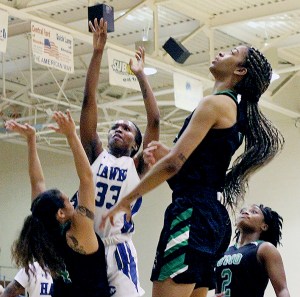 Keibra Hopkins (#33) had the game-winning shot for the Hawks at home on Tuesday as her tip-in beat the final buzzer in a thrilling 70-68 win over regional rival Mt. Olive. Photo courtesy of Chowan University

Chowan led by five (55-50) in the early stages of the fourth quarter before Mr. Olive mounted a comeback. Later in the period, Robinson scored on back-to-back possessions to keep the Hawks in front, but a Mt. Olive basket evened the contest at 68-68 with 1:11 remaining.

Chowan had two great looks at the basket on their next possession but could not regain the lead. Chowan’s defense stood tall on Mt. Olive’s ensuing possession to force an air-balled three-point attempt.

With 7.6 seconds remaining, the Hawks drew up a play. The first shot inside the paint failed to find its mark, but Hopkins was positioned in front of the rim for the tip-in before time expired for the victory.

Mount Olive used a 10-0 run during the opening period to lead 16-4 before Bland knocked down a three-pointer to counter with a 7-0 run for the Hawks. Back-to-back baskets by Robinson closed the gap to 16-11, but the Hawks trailed 20-13 at the end of the opening stanza.

The Trojans opened their lead up to 24-13 before Patterson connected from the floor and Copeland dialed up a triple. Copeland and Robinson traded points with UMO to close the gap to 28-22.

Mount Olive pushed back before Olivia Gaither knocked down a jumper to trail 37-31 at the intermission.

Chowan used a 20-6 run in the third quarter to swing the momentum in the regional showdown. After an early bucket by the Trojans, Chowan went on a 10-0 run to take their first lead in the contest, 41-39. Tyaysia Sharpe started the run with a fastbreak jumper. Patterson and Robinson tallied a pair at the stripe before the pair posted back-to-back buckets.

The Trojans would rally to take a slim lead with four quick points prior to Patterson adding a pair at the line and Copeland knocking down a three-pointer. Patterson picked up two more points at the line and Robinson posted a layup to lead 51-43 at the end of the third quarter.

Chowan will look to continue their momentum as the Hawks welcome North Greenville and Converse in a Conference Carolinas weekend. The Blue and White take on NGU on Friday, February 4 at 5 pm.