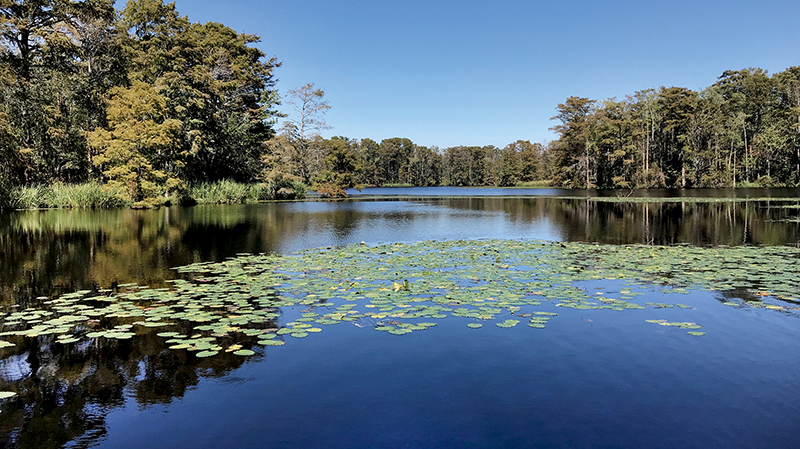 Keel Creek is lined with century-old cypress and tupelo, and carpeted with lily pads…all part of a home to a diverse range of fish and wildlife. Photo courtesy of NC Coastal Land Trust

COLERAIN – The purchase of a floodplain forest near the Chowan River will protect this ecologically sensitive area.

The Coastal Land Trust recently announced the purchase of 766 acres in Bertie and Hertford counties, near the Town of Colerain. With three miles along the Chowan River and more than seven miles of Keel Creek, this expansive forest will help store floodwaters and reduce flooding, enhance water quality, and protect habitat for fish and wildlife, according to Coastal Land Trust officials.

The newly-protected forest contains the heart of Cow Island Swamp, a site identified as “ecologically significant” by the North Carolina Natural Heritage Program. This designation is due to the age and expanse of the mature bald cypress and tupelo gum forest, with many trees more than 100 years old. The Chowan River itself has been classified as a highly ecologically significant aquatic site due to the presence of several rare fish, mollusk, and crayfish species.

The tract provides important nursery areas for anadromous fish such as striped bass, American and hickory shad, and possibly Shortnose and Atlantic sturgeon (federally endangered species), along with habitat for rare mussel species and rare crayfish.

It is equally important for birds such as Osprey, Bald Eagle, Wood Duck, Barred Owl, Prothonotary Warbler, and Swainson’s Warbler. The forested wetlands along the Chowan River from Colerain to Parkers Ferry, including this newly-protected tract, have been identified as an Important Bird Area by the National Audubon Society.

“This purchase conserves almost all of Keel Creek, from its mouth at the Chowan River to its headwaters,” said Janice Allen, the Coastal Land Trust’s Director of Land Protection.

“Keel Creek is remote, wild, and brimming with an incredible abundance and diversity of fauna and flora; a great natural treasure within North Carolina’s awesome coastal system,” Dr. Riggs noted.

Tom Earnhardt, host and co-producer of the UNC-TV series, Exploring North Carolina, is no stranger to North Carolina’s outdoor wonders. He described his experience with Keel Creek.

“Wild, unique, and awe-inspiring were among the thoughts that came to mind when I first visited Keel Creek,” Earnhardt said. “This is a coastal riverine cathedral lined with cypress, tupelo, and carpeted with lily pads. In the summer it is home to a large concentration of nesting osprey and bald eagles, along with a choir of neo-tropical songbirds.

“….The area was one of the first settled in North Carolina in the late 1600s and early 1700s.,” Earnhardt continued. “Here, those settlers, and the Native Americans before them, were supported by huge concentrations of shad, herring, and striped bass. The preservation of Keel Creek is one of North Carolina’s great conservation success stories in recent years. It is places like Keel Creek that make us take a closer look at how our cultural history is closely tied to our natural heritage. Congratulations to the North Carolina Coastal Land Trust!”

The Chowan River and its tributaries, such as Keel Creek, are important to the fisheries, wildlife and scenic beauty of the North Carolina coast. The Coastal Land Trust’s Chowan River initiative has protected more than 4,000 acres within the river basin.

“Stay tuned for more land conservation along the Chowan River near Colerain as we have several other projects lining up,” stated Allen.

The North Carolina Coastal Land Trust enriches coastal communities of North Carolina through conservation of natural areas and working lands, education, and the promotion of good land stewardship. Founded in 1992, the Coastal Land Trust has saved more than 84,000 acres of places with scenic, recreational, historic and/or ecological value, and has offices in Wilmington, New Bern and Elizabeth City.