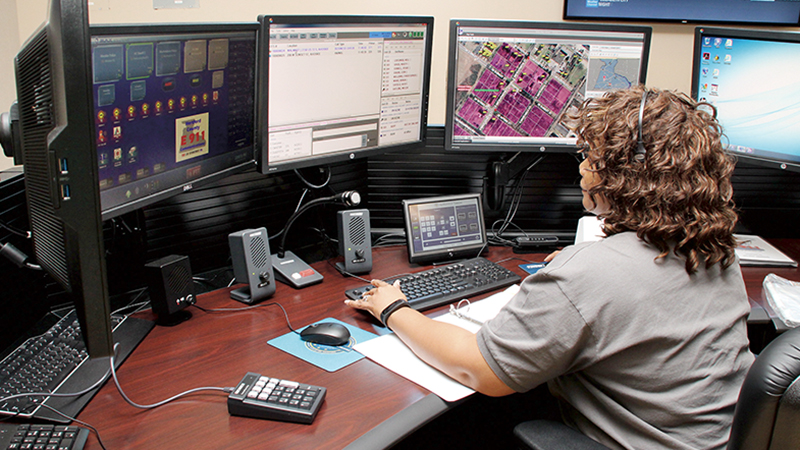 GATESVILLE – A plan is in place to make upgrades to the Gates County 911 Communications Center in an effort to return that service to the county.

Jason Sample, Gates County Emergency Management Director, and Heather Ceney, 911 Interim Supervisor, were on hand at last week’s regularly scheduled meeting of the county commissioners to give an update of the issues with the 911 system.

“This situation has been going on for years at our 911 center,” said Sample. ‘This is nothing new. [Problems] with the equipment didn’t happen overnight. It’s not going to be cured overnight and it’s going to be expensive in the grand scheme of things.”

Sample said he contacted the North Carolina 911 Board and they issued a statement saying, “Gates County has not spent any money on upgrades on the main 911 center since 2015.”

“Right now we have hired three full-time personnel with one fully certified, and have hired a part-timer who is fully certified and two in training right now (with two 40-hour courses remaining),” Sample told the commissioners. “Once we have them fully trained, which should be in the middle of February, we’ll have the correct staffing to bring it [911 dispatch] back to Gates County.”

Sample said he has ordered a new CAD server, which he stressed is the “minimum piece of new equipment we need right now.”

“Effectively, we can be back, as long as staffing doesn’t change from what we have right now and we get that new CAD server installed, by the end of February, that’s our goal,” Sample said.

He added that the CAD server isn’t the only piece of new equipment needed.

“There’s a lot of things that need to be done inside the dispatch center,” Sample noted, referencing recorders and furniture as other needed items. “We’re in the process of getting estimates right now, broken down into sub categories, of exactly what the state will cover [in new equipment] and what the county will have to cover.”

“On the day we moved [there], Dec. 17,” Sample answered. “When things happened that morning, I had 12 minutes to make a decision so that [911] service was not lost. It was sketchy there for a few minutes, but we did not lose service as Chowan [County] took our [911] calls originally and then handed them off back to us here. By 6 pm that evening, everything had been switched to Perquimans.”

Freeman also asked about the cost incurred by Perquimans County to handle Gates County 911 dispatch from Dec. 17 to the anticipated arrival of the service back in Gates County by the end of next month.

“There will be discussions of what additional overhead Perquimans experienced as far as hosting us there at their dispatch center,” said Gates County Manager Tim Wilson.

Dr. Althea Riddick, Commission Chair, said decisions had to be made quickly, without regard to cost, in order to ensure that the county’s 911 dispatch remained operational, no matter if those calls were handled elsewhere.

“The first thing this board always needs to think about is the public health and safety of our citizens,” she said.

“I would like to ensure that our part-time staff [dispatchers], if they are certified and eligible, who have worked with us through this emergency situation, we need to make sure they are reviewed for positions also,” said Commissioner Jonathan Craddock.

Commissioner Jack Owens said he wasn’t blaming anyone, but none of the items mentioned earlier that needed to be replaced in the 911 dispatch center were requested for the board to fund previously.

“Nobody ever came before this board and said replace our technology,” said Owens, who was first elected in 2010. “Because if they had, we would have approved it. 911 service is critical. All of our critical services – the sheriff’s office, the rescue squad, the fire departments – all start with the 911 center. We have to know if there’s a need.”

Wilson said he too was unaware of the equipment needs for 911 dispatch. He said the only previous request made to him by the supervisor of that department was to have a lock placed on the dispatch center door in an effort to make that space more secure and to prevent unauthorized personnel from entering. That request was immediately honored, Wilson noted.

“We need to thank Perquimans for stepping up and helping us in our time of need,” stated Commissioner Linda Hofler. “There’s a lot of misinformation out there, but I hope people listened to what was said here tonight. Things happen and no one can predict when it will happen, but for us to be able to get everything transferred in about 12 hours was remarkable.”

Later in the meeting, the board heard a proposal to use Perquimans County as a back-up to handle 911 calls should that need arise again in the future. The proposal also included a fee schedule of operational expenses. The commissioners approved that proposal in a 5-0 vote.