GREENSBORO – With family by his side, Lokie Charles Lackey left this life peacefully on Tuesday, January 25.

Born in Franklin, VA on February 20, 1945 to Mildred Loder Futrell and Walter Charles Lackey, Sonny grew up in Murfreesboro, North Carolina. He played football in high school and at Catawba College, and graduated from the University of North Carolina at Chapel Hill with a degree in Business Administration. 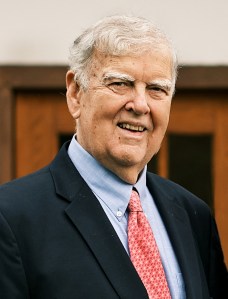 After graduation, he married Gayle Stafford Caldwell in 1968 and they settled in Greensboro to raise a family. He started a career in accounting, working for A.M. Pullen as a CPA, and went on to earn a law degree from Wake Forest University. Sonny spent his career in finance, working mostly in manufacturing and the paper business.

In addition to his parents, Sonny was preceded in death by his sister, Emma Jane Lackey.

Sonny’s true passion was his family, and he loved spending summer vacations and holidays with his children and grandchildren. As a lifelong fisherman, he cherished the fishing trips he took with his close friends to the Bahamas, Alaska, and Wyoming. Sonny and Gayle traveled extensively, making friends wherever they went. He also enjoyed gardening and took pride in growing the perfect tomato.

Sonny was selfless and lived his life in service of others. He was a caring and thoughtful husband, father, grandfather, and friend. Good Night Gentle Giant.

There will be a private burial at St. Francis Episcopal Church.

The family wishes to thank all our friends who have shown such an outpouring of support during Sonny’s two-year battle with cancer. We are so grateful for the meals, rides, prayers and well wishes. Each of you has made such a difference every day.

In lieu of flowers, the family requests memorials be made to St. Francis Episcopal Church, 3506 Lawndale Dr, Greensboro, NC 27408.