Arrangements for Elam, who was the school’s fifth president and the former president of Roanoke-Chowan Community College in Ahoskie, are currently incomplete and being handled by Robinson Funeral Home in Littleton. 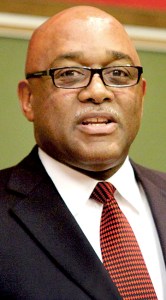 United States Congressman G.K. Butterfield said, “My thoughts and prayers are with Dr. Elam’s wife, Maxine, his family, and all those who knew and loved him. Our state, the First Congressional District, and the North Carolina Community College System have experienced a devastating loss.”

Butterfield said, “Dr. Elam spent many years committed to educating students in underserved communities. He was an outstanding educator who created pathways for his students to advance themselves in their careers and lives.”

He described Elam as the epitome of what it means to be an educator.

“From his focus on education equity and offering people of color opportunities to share their experiences in community college leadership roles, he was an inspiration to his students and a role model for all educators seeking to make a difference in the lives of others. Dr. Elam will be remembered for his enthusiasm for teaching and his dogged dedication to his students. His legacy will forever live on,” Butterfield said.

Halifax County Board of Commissioners Chair Vernon Bryant said, “We are all saddened by Dr. Elam’s passing. He had been a very good leader in the community and the college.”

Bryant described the 65-year-old college president “as a man of a high degree of integrity. He was a good friend and a confidante and he will be sorely missed by the county and the community college.”

Elam, Bryant said, was an example of a person who knew the value of working together.

“We’ve always talked about working together works and he was truly an example of that. He really has been a team player,” Bryant stated.

Allen Purser, the former director of the college’s foundation, said, “I did have a lot of respect for Dr. Elam. He was a quiet leader who consistently moved things forward and didn’t dwell on the past. I had the honor to be able to work for the college but more importantly Dr. Elam was my friend. He was a family man who cared deeply for the community and he was a man of God.”

Mike Williams, chair of the college’s board of trustees, said its members knew Elam had been ill. “I’m very saddened to learn of his death. The college and the community in general lost a good person. I found Dr. Elam to be a person of integrity and a committed educator. Working with him was a delightful experience.”

Roanoke Rapids Graded School District Superintendent Julie Thompson said, “We are deeply saddened to learn of the death of HCC President Dr. Michael Elam. Dr. Elam was always supportive of our district. He was actively involved in our Academically or Intellectually Gifted Advisory Council, Business Advisory Council, worked with us to increase community college offerings for RRHS students, and was instrumental in helping us open Roanoke Rapids Early College High School.”

Said Thompson: “On behalf of our RRGSD family, including our board of trustees, I want to send my deepest condolences today to his family and the entire HCC family. Dr. Elam will be missed.”

Elam was chosen as the college’s president in 2016 out of a field of six finalists and extensive interviews which included local media.