There’s an increasing possibility that the Roanoke-Chowan area will again see measurable snowfall for the second straight weekend.

At 3 pm today (Wednesday), the National Weather Service’s office in Wakefield, VA held a winter storm briefing in regards to the forecast over the next 72 hours. 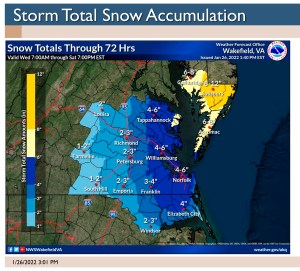 Those meteorologists said the snow totals for Friday night into Saturday morning have increased for portions of eastern Virginia and Maryland’s Eastern Shore.

“Heavy snow accumulations of up to 6-12 inches are possible for portions of far eastern VA and the MD Eastern Shore, leading to the potential for significant travel disruptions. Lesser snow amounts are expected along and west of Interstate 95,” NWS-Wakefield officials noted in its briefing.

Additionally, gusts of 40 to 50 mph may result in localized power outages and lower visibilities with any heavier snowfall. The higher wind will be along the North Carolina / Virginia / Maryland coast.

As for the Roanoke-Chowan area, NWS-Wakefield says there is “high confidence that much of the area will see at least two inches of snow, especially east of I-95.”

The precipitation may start off as light rain Friday afternoon before transitioning to all snow late Friday evening and into Friday night and Saturday morning.