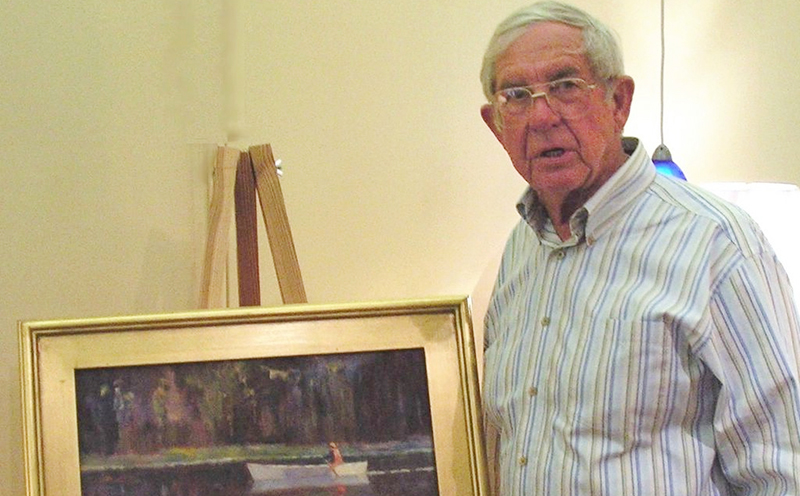 Dr. Fred Saunders is shown here at an art show held a few years ago. Saunders, who passed away earlier this week, was well known and respected for both his medical advice and his paintings of local scenes. File Photo

COLERAIN – Dr. Fred Saunders, who served the Roanoke-Chowan area for decades, passed away on January 17 at the age of 93.

Saunders, a native of Aulander, received his undergraduate degree and then medical degree from UNC-Chapel Hill. Afterwards, he did a year of residency at the Medical College of Virginia, and then joined the army as a medical doctor, serving mainly in Inchon, Korea.

Saunders opened his own practice in Aulander when he returned home in 1958, following in the footsteps of his father who was also a doctor in Aulander. He treated the ailments of people in the town and surrounding areas for decades until fully retiring in 2004.

Colleagues, employees, and friends all had fond remembrances of Dr. Saunders and the impact he made on the lives of many.

“I worked with him for 22 years,” said Robin (Byrum) Centner, former office manager for his practice. “He was a very well-liked person by all. He wasn’t only a boss, but he was a friend to us. He was like family.”

She recalled that when her son was going through a tough time as a teenager, Dr. Saunders spent some time teaching him how to fish and how to sail.

“He was just a very good man,” she said.

Centner also said she has many great memories of working together. The atmosphere in the office was a friendly one which meant employees enjoyed working there for many years.

Kathy McCaskey worked as an LPN with Dr. Saunders for 25 years.

“We did something of everything almost every day,” she recalled. “There were some long days; if someone needed to be seen for any type of ailment, he would never refuse them, no matter what time of the day or night. And he would make house calls.”

McCaskey remembered the time when Saunders was still in the practice of delivering babies.

“Even if the waiting room was full of regular patients and he was called to go to the hospital and deliver a baby, no one left; they would wait around to see him when he got back to the office,” she said.

She recalled one particular case where Dr. Saunders was summoned to the scene of an accident where a person had fallen off the back of a truck.

“He knew that the person wasn’t going to make it due to the extent of their injuries,” McCaskey noted. “The parents of that individual arrived and he informed them that their loved one could help save other lives as an organ donor. The parents consented and Dr. Saunders reached in his pocket and pulled out some cash, telling them to use it for gas and food as they had to travel to the hospital in Greenville where their family member later passed away. That’s what kind of person Dr. Saunders was…always looking out for others; he was thoughtful and caring.”

As it turned out, Saunders also excelled in sharing his vast knowledge.

“He was the best teacher I ever had,” McCaskey stressed. “He would always tell me why he would reach a certain diagnosis of a patient as well as letting me know the reason why he prescribed the medicine he used to treat them. I learned more from him than I did in school.”

“He’s been an inspiration. I was very lucky to have him guide me through when I came,” Khoury said. “It was a lot of pressure because he’d been adored, and he had a lot of years between him and his dad. But he introduced me to the patients. He supported me. I couldn’t have done what I did without his support.”

“He taught me a lot,” he continued. “Above all, he taught me to be a good person and be passionate about the patients.”

Dr. Khoury said Saunders never forgot anybody, and that he knew a lot about his patients and their families.

“He was a very kind man, and he will be dearly missed. I’m a better person because I’ve known him and was able to work under his patronage for a time. We’ll try to keep his legacy going,” Dr. Khoury concluded.

Dr. Charles Sawyer, a fellow long-time physician who practices at Ahoskie Comprehensive Care, knew Saunders long before they obtained their medical degrees. Saunders grew up in Aulander while Sawyer was raised in Windsor.

“It’s been three generations of special, meaningful friendship between Fred Saunders’ family and my family,”

“Our children were basically raised together and were great friends,” he continued, adding that the same is true for their grandchildren now as well.

Sawyer had high praises for his old friend, saying, “He was a wonderful doctor. He had a great mind, and was a great family man. Just a southern gentleman.”

In addition to his work in the medical field, Dr. Saunders was also an avid painter.

“He would share his paintings with us as Christmas gifts; they are my prized possessions,” McCaskey said.

Dr. Sawyer described Saunders’ paintings as scenes from the countryside, often focusing on subjects such as creeks and boats and barns.

“He was a wonderful painter of the outdoors,” Sawyer said.

Fen Rascoe, a painter from Windsor, called Saunders one of the best impressionists and watercolorists in North Carolina. Impressionism, he explained, is a “loose” style of painting where the images aren’t meant to be as realistic as photographs. And Saunders’ painting method of choice was “plein air” which meant that he’d sit outside to paint the scene right in front of him.

“I started out painting in the studio,” Rascoe said, noting that he was a bit reluctant to try painting outside at first.

Rascoe didn’t even have an outdoor easel at the time, so Saunders put together a makeshift one using an old TV dinner tray and a sheet music stand. Then he took Rascoe to visit some red barns outside of Aulander, and they painted together.

“Since then, I’ve been hooked. I guess he saw something in me, that I really wanted to be a painter. Most people would not have taken that time to pull somebody under their wing and mentor them like he did me,” Rascoe explained.

“He was a great teacher to me and others who got to paint with him,” he continued. “He was very instructional and very unselfishly shared his knowledge.”

It’s clear that Saunders was well-known and well-liked in the community because of his kindness and compassion in all aspects of life. He was known for making plenty of “house calls” to visit his patients, even when that was no longer standard practice for many physicians.

In 2018, he was honored with the Order of the Long Leaf Pine which is presented by the governor each year to people who go above and beyond to serve their communities.

Perhaps McCaskey summed it up best, saying, “Every day was a good day with Dr. Fred.”

Funeral services for Saunders are scheduled for 2 p.m. on Wednesday, Jan. 26 at First Baptist Church in Washington, NC.