MURFREESBORO – Chase Barnett knocked down a pull-up jumper as time expired to send the fans into a frenzy as the Chowan men’s basketball team upset their rival, Mount Olive, 74-73 in Conference Carolinas action here Thursday evening.

Barnett scored a career-high 17 points, including the game-winner. He added six assists and five rebounds. 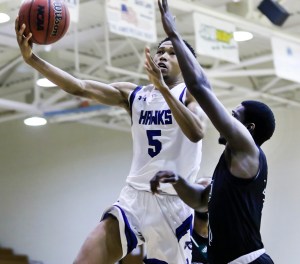 In a game that featured offensive spurts by both teams, Mount Olive, holding a 73-72 lead, had a chance to go up by three with 17 seconds left. But Wilson had other ideas as he registered a block shot and the ball fell into the waiting arms of Estime His ensuing pass upcourt was knocked out of bounds by the Trojans.

The final in-bounds play with 6.6 seconds remaining found Wilson as the trigger man. He found Donavon Martin in the near corner before a pass to Barnett on the left wing. Barnett dribbled to the middle of the charity stripe and knocked down the jumper as the buzzer sounded for the 74-73 victory.

The first half was highlighted by a huge offensive outburst by the Hawks as Estime heated up from behind the three-point line. He drained four shots from deep that lit the fuse on an 18-2 run and a 31-14 lead.

Christian Koonce and Martin added a bucket in the later stages of the period. Wilson recorded a putback bucket to send the Hawks into the locker room with a 37-27 halftime advantage.

Sparked by back-to-back baskets from Wilson plus a bucket by Barnett and a pair of free throws from Koonce, Chowan edged out to a 45-32 lead in the early stages of the second half.

Martin evened the score at 64-all with a jumper in the paint at the 4:55 mark. UMO answered with a three-pointer on their next possession. Back-to-back buckets by Wilson drew the score even at 68-all. Barnett and Wilson traded baskets with the Trojans in the final two minutes of the contest as UMO held a one point lead.

The win was the second this week by the Hawks, who improved to 3-10 overall and 3-8 in league play.